The Boeing Company (BA - Free Report) recently announced program deliveries across its commercial and defense operations for the fourth quarter of 2018. The figures show a 13.9% rise in commercial shipments and 25.6% decline in defense shipments from the previous year.

In the defense and space business, Boeing’s deliveries were 98 in 2018, down 43.7% from 174 a year ago. Total deliveries consisted of 23 remanufactured AH-64 Apache helicopters and 30 Chinook helicopters (new and renewed). The company also delivered 17 F/A-18s, 16 P-8 models and 10 F-15s along with 1 Military Satellite, and 1 Commercial and Civil Satellite.

Boeing reported fourth-quarter 2018 commercial deliveries of 238 airplanes, up year over year, primarily backed by the higher demand for 737 jets. Delivery of the single-aisle 737 jet increased to 173 in the fourth quarter of 2018 from 148 a year ago.

Shipments of the 777 and 787 Dreamliners totaled 11 and 39 compared with 16 and 36 in the year-ago period, respectively. For the 747 and 767 jets, the company delivered 1 and 14 jets compared with six  and three sold in the year-ago quarter, respectively. The 767 deliveries made in the fourth quarter include the transfer of 10 767-2C aircraft to Boeing Defense, Space & Security for the U.S. Air Force KC-46 tanker program.

Boeing’s total deliveries were 270 units in the fourth quarter of 2018 compared to 252 in the year-ago quarter.

Being the largest aircraft manufacturer, and one of the largest aerospace and defense contractors in the United States, Boeing enjoys a solid inflow of contracts from both the Pentagon and foreign allies, courtesy of its varied
product offerings.

In particular, the company’s commercial business has been gaining traction in recent days, in the form of huge inflow of jet orders from airlines worldwide. Evidently, last month Boeing inked a deal with Flyadeal to deliver 50 737 MAX Airplanes worth $5.9 billion. During the same month, Boeing inked a $12-billion deal with Green Africa Airways to deliver 100 737 jets. Such large contract wins drove commercial deliveries for this jet maker in 2018.

In the context of its defense business, Boeing’s delivery figures remained soft compared with the figures registered in the previous year's quarter. One reason that may have led to reduced delivery numbers is delay issues associated with the KC-46A Tanker program. Evidently, in the third quarter, the program gained cost growth of $140 million after-tax due to higher-than-expected effort to meet customer requirements to support delivery of the initial aircraft along with incremental delays in certification and testing. Such efforts made in this program might have hampered the delivery timing of military jets for the company. Hence, the results were disappointing in this unit.

Shares of Boeing have gained about 9.1% in a year, against the industry’s decline of 6.6%. The outperformance was primarily led by significant demand for the company’s military jets across the globe along with robust long-term demand for its commercial aircraft. 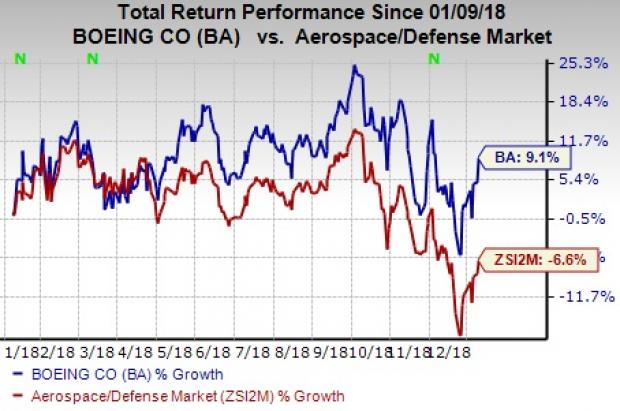 AeroVironment came up with average positive earnings surprise of 257.01% in the last four quarters. The Zacks Consensus Estimate for fiscal 2019 earnings has increased 33.3% to $1.48 in the past 90 days.

Teledyne Technologies came up with average positive earnings surprise of 12.92% in the last four quarters. The Zacks Consensus Estimate for 2019 earnings has increased 5.26% to $9.00 in the past 90 days.

Northrop Grumman delivered average positive earnings surprise of 28.01% in the last four quarters. The Zacks Consensus Estimate for 2019 earnings has moved up 3.53% to $18.44 in the past 60 days.