In order to provide better wireless connectivity to its customers and FirstNet subscribers, AT&T Inc. (T - Free Report) has augmented the LTE coverage for its network by adding more than 50,000 square miles across the country in 2018. The strategic move, which now enables the telco giant to cover additional 1 million individuals, underscores its network building efforts to enhance connectivity for users in urban and rural locations.

AT&T intends to ramp up the FirstNet deployment while focusing on 5G to retain its leading position in the wireless market. The company continues to introduce new sites and build LTE network to provide superior network speeds and capacity as the demand for data increases.

The company has also deployed Band 14 spectrum in more than 500 markets to expand its nationwide coverage and capacity while serving public safety agencies. By the end of 2019, AT&T expects its network capacity to increase 50% from the end of 2017 while laying the foundation for the future of connectivity.

Further, AT&T remains focused on managing its debt portfolio and is well on track to achieve its set target of 2.5x debt-to-EBITDA range by 2019. It is also revamping its lineup of video products, pricing and promotion initiatives. The company is well poised to benefit from the ongoing digital revolution while sustaining its healthy growth momentum in wireless business.

However, the company’s shares have lost 17.5% on an average compared with a decline of 2.3% for the industry in the past year. This can be largely attributed to competitive pressure coupled with steady decline in linear TV subscribers and legacy services, hurting the firm’s profitability. 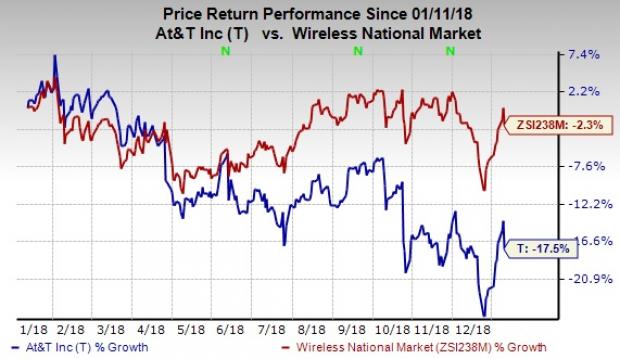 Moreover, AT&T’s huge debt burden acts as a major impediment to bottom-line growth. It is to be seen whether such improved service offerings to tap opportunities in rural and urban markets across the country can help the company script a turnaround in 2019.

Sprint has a long-term earnings growth expectation of 19.6%.