In the race for supremacy in the commercial aircraft market, aerospace giant — The Boeing Company (BA - Free Report) — once again surpassed its arch rival Airbus SE (EADSY - Free Report) , this time for the seventh year in a row, since 2013. Notably, shares of Boeing gained 4.8% yesterday, after the jet maker reported record-setting aircraft deliveries in 2018.

Deliveries Made by the Aircraft Heavyweights

Boeing reported commercial deliveries of 806 jets in 2018, surpassing its last year’s record of 763. On the other hand, Airbus made total commercial delivery figures of 800 jets during the year, up 11% year over year. However, these figures failed to surpass Boeing’s delivery numbers. Furthermore, Airbus lagged Boeing on net orders, only achieving 747 orders during 2018 compared to Boeing's 893.

How Boeing Edged over Airbus?

Boeing being the largest plane maker in the United States has its revenue exposure spread across more than 90 countries around the globe. From the context of recent events, Boeing has been able to edge over its arch rival, by acquiring major contracts pertaining to commercial airplanes, on a global scale.

Boeing's production discipline and supplier partners have additionally helped the company in manufacturing and delivering more aircrafts in 2018 than before, to meet the strong demand for air travel across the globe. Whereas Airbus experienced a strenuous year that was highlighted with major production delays leading to slow aircraft deliveries.

During the year, Boeing also toppled Airbus in manufacturing more expensive wide body jets. The company built 226 of the expensive wide body airplanes compared with 154 made by Airbus (as per The Seattle Times). As a result, Boeing remained well ahead of its arch rival in terms of delivery valuation. Per Avitas, an aircraft-valuation consultancy firm, Boeing delivered aircraft worth $60 billion after standard discounts compared to Airbus' jets worth $54 billion.

In July 2018, Boeing and Embraer (ERJ - Free Report) entered into a joint venture (JV), under which Boeing will own an 80% ownership stake worth $3.8 billion in Embraer’s commercial jet business. This JV represented the biggest realignment in the global aerospace market in decades, further strengthening Boeing’s commercial business against Airbus and the emerging aerospace companies from China, Russia and Japan. Considering this latest deal, which is expected to get complete by 2019-end, we may expect Boeing to continue with its supremacy over Airbus in the commercial jet space over the next few years.

Shares of Boeing have gained about 9.5% in a year, against the industry’s decline of 6%. The outperformance was primarily led by significant demand for the company’s military jets across the globe along with robust long-term demand for its commercial aircraft. 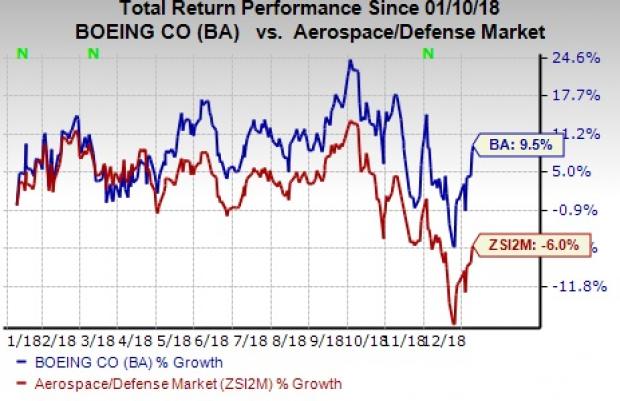 AeroVironment came up with average positive earnings surprise of 257.01% in the last four quarters. The Zacks Consensus Estimate for fiscal 2019 earnings has increased 33.3% to $1.48 in the past 90 days.