Here's Why You Should Hold LyondellBasell (LYB) Stock Now

LyondellBasell Industries N.V. (LYB - Free Report) is among the biggest plastics, chemical and refining companies globally. The company is poised to gain from its expansion projects. The buyout of A. Schulman is also expected to create significant cost synergies.

Shares of LyondellBasell, which currently carries a Zacks Rank #3 (Hold), have lost 25.2% in the past year compared with the industry’s 27.2% decline. 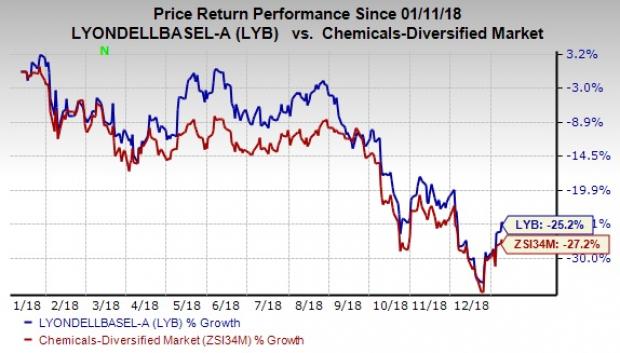 In October 2018, LyondellBasell stated that it expects to drive operational and business improvements in Refining, Technology as well as Intermediates and Derivatives businesses in the fourth quarter. The company is poised to benefit from increased access to markets, incremental synergies from the integration of A. Schulman acquisition and formation of the Advanced Polymer Solutions segment.

The company is on track with the construction of a High Density Polyethylene (HDPE) plant on the U.S. Gulf Coast that will employ its proprietary Hyperzone PE technology. The facility is scheduled for startup in mid-2019 and will have an annual capacity of 1.1 billion pounds.

The company is also building a world scale plant on the U.S. Gulf Coast for producing propylene oxide (PO) and tertiary butyl alcohol (TBA). The facility will have annual capacity of 1 billion pounds of PO and 2.2 billion pounds of TBA and its derivatives.

The company has also acquired A. Schulman in a deal worth $2.25 billion. The move has created a premier global provider of advanced polymer solutions with extensive geographic reach, leading technologies and a diverse product portfolio. The buyout doubles the size of LyondellBasell's existing compounding business and creates a platform for future growth with reach into additional high-growth markets. The company expects to capture $150 million in run-rate cost synergies within two years.

However, LyondellBasell’s operations are subject to maintenance outages, which are affecting results. The company expects roughly $25-million impact from downtime associated with planned maintenance at its German cracker in the fourth quarter of 2018.

CF Industries has an expected earnings growth rate of 70.5% for 2019. The company’s shares have moved up 3% in the past year.