Ford Motor Company (F - Free Report) and Jaguar Land Rover announced heavy job cuts in Europe, per Reuters. Stricter emission standards, a sharp decline in the demand for diesel vehicles and a slump in global economies led by China might have prompted these automakers to take such a move.

In fact, a trade dispute between the United States and China as well as the exit of the U.K. from the European Union (which is awaiting) have destabilized the global auto market. The automakers across the globe are now reevaluating the profit proposition of the individual models and facilities, and reorienting their business models accordingly.

In recent quarters, Ford and Jaguar Land Rover — whose profits were strained compared with their peers — are making strong strides to transform their business in Europe. Ford’s business restructuring in Europe will include job cuts, plant closures and the discontinuation of some models. Per the news, Ford’s plans include the review of operations in Russian, exiting the family vans or MPV segment, and merging Ford U.K. and Ford Credit headquarters to attain 6% operating margin in Europe.

In 2018, Jaguar Land Rover witnessed a sharp decline of 21.6% in demand in China, which can be attributed to ongoing trade spat between the United States and China, and the economic slowdown in China. The company announced that it will cut 4,500 out of 42,500 jobs.

In the past six months, Ford has underperformed the industry it belongs to. The company’s shares have lost 18.7% compared with 3.6% decrease recorded by the industry. 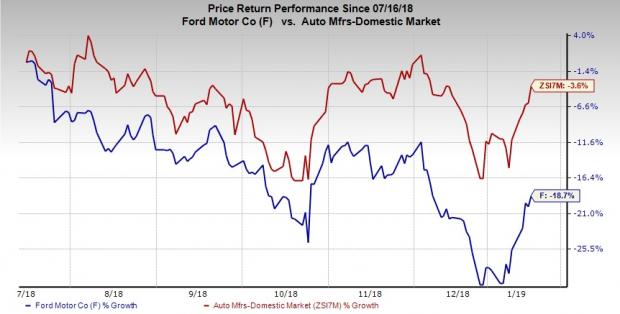 Volvo has an expected long-term growth rate of 15%. Over the past month, shares of the company have gained 6.9%.

Advance Auto Parts has an expected long-term growth rate of 12.1%. Over the past year, shares of the company have increased 37.5%.

Fox Factory has an expected long-term growth rate of 17.9%. Over the past year, shares of the company have risen 59.5%.