Shares of Gannett Co, Inc. (GCI - Free Report) rose 21.2% on Jan 14, following the announcement of a buyout proposal from MNG Enterprise. The proposed deal will require MNG to pay $12 per share to acquire Gannett, that reflects a cash premium of about 41% on Gannett’s closing price at the end of 2018. MNG, also known as Digital First Media, is the owner and operator of one of the leading newspapers in the United States.

Per media reports, MNG has offered $1.36 billion for this acquisition. According to sources, MNG already has a 7.5% ownership in Gannett, which makes it the largest stakeholder of the latter and increases its chances to acquire it.

Well, Gannett is one of the many media companies bearing the brunt of declining print media. This is largely because rampant technological advancements have opened up multiple ways, in which the industry can reach its target audience. In response to this, media companies have been undertaking extreme measures, including headcount reduction and cost-cutting actions. That said, this move might affect a bevy of employees who are a part of this newspaper publishing company, as MNG is acclaimed for its aggressive buyouts and layoffs.

Further, Gannett has witnessed declining profits for a while now. In fact, the company had earlier slashed its top and bottom-line projections for 2018. Adding to the woes, the company is facing a leadership void, with its CEO Robert Dickey planning to step down by May 2019.

Nevertheless, Gannett is making efforts to diversify its revenue streams by increasing digital ad revenues. In doing so, the company has been involved in back-to-back acquisitions in the digital space. Some of the notable buyouts include WordStream Inc. in July 2018 and ReachLocal Inc. in August 2016.

Additionally, Gannett recently acquired majority ownership in Grateful Ventures, LLC, a digital media company. This investment is expected to strengthen and diversify USA TODAY NETWORK’s portfolio — a subsidiary unit of Gannett — alongside increasing its audience base. Also, it is likely to boost the parent company’s owned and operated digital websites.

A glance at Gannett’s share price performance shows that this Zacks Rank #1 (Strong Buy) stock has gained 22.5% in the past month, outperforming the industry’s growth of 4.2%. 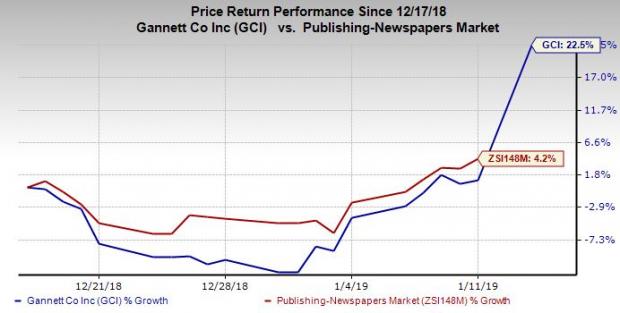 McCormick & Company (MKC - Free Report) has long-term growth of 9% and a Zacks Rank #2.

Ascena's Holiday Comps Up 3%, Stock Down on Bleak Q2 View