Continuing its streak of contract wins from customers within the U.S. federal government, Harris Corporation HRS recently announced that it has secured a $75-million order from the Marine Corps (“USMC”).

Such contract wins are expected to enhance the company’s top line, which witnessed a compound annual growth rate of 16.7% from fiscal 2015 to fiscal 2018.

The company will also provide allied devices for the AN/PRC-117G radios presently fielded by the USMC, including antennas. This would enable the radios to support satellite communication while moving, when connected to the MUOS satellites.

Harris boasts a leading position as a technology innovator, aiming to solve customers’ mission-critical challenges in more than 100 countries. The company has been continuously investing in the development of MUOS and related advanced waveforms to increase the capability of AN/PRC-117G radios.

Notably, the software upgrade will enable the Marines to access cutting-edge MUOS satellite constellation that provides satellite communication to allow them to talk and easily share data anywhere in the world. It will provide the Marines with improved voice and data communication facilities with more users, even in harsh environments. The MUOS upgrade will also enable interoperability with other U.S. Department of Defense and associated users that deploy it in the future.

Harris’ solutions are used by customers in public safety, air traffic management, space and defense. It announced plans to invest more than $125 million in internal R&D in Florida in fiscal 2019, encouraging high-paying jobs. This order will help to bolster the Rochester-Finger Lakes economy while ensuring that the Marines have the most advanced radios.

Further, the company’s business operations will be augmented by its previously announced plan to merge with L3 Technologies, Inc. LLL. The combined entity — L3 Harris Technologies — will be a global defense technology leader, creating more opportunities for employment and investment growth.

Owing to proper execution of operational plans, Harris’ shares have gained 35.7% on an average compared with 1.4% growth recorded by the industry over the past two years. 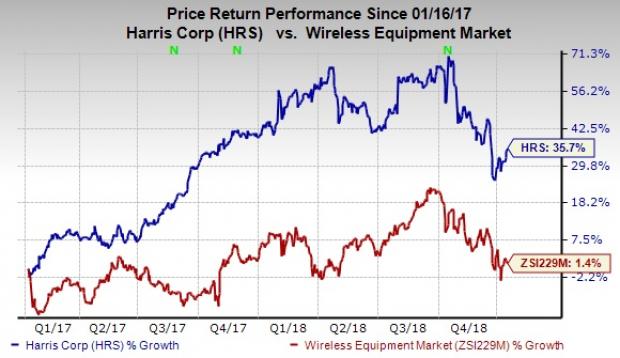 Harris currently has a Zacks Rank #3 (Hold). Better-ranked stocks in the industry include InterDigital, Inc. IDCC and Ubiquiti Networks, Inc. , both carrying a Zacks Rank #2 (Buy). You can see the complete list of today’s Zacks #1 Rank (Strong Buy) stocks here.

InterDigital has a long-term earnings growth expectation of 15%.

Ubiquiti has a long-term earnings growth expectation of 14%.