Here's Why You Should Hold Onto Westlake Chemical Stock Now

Westlake Chemical Corporation (WLK - Free Report) is poised to gain from strong global demand for its major products, acquisitions and investments in its Vinyls business. However, it faces headwinds from higher feedstock costs and maintenance outages.

Shares of the chemical maker, which currently carries a Zacks Rank #3 (Hold), have lost 31.5% over the past year, modestly outperforming the 32.4% decline of its industry. 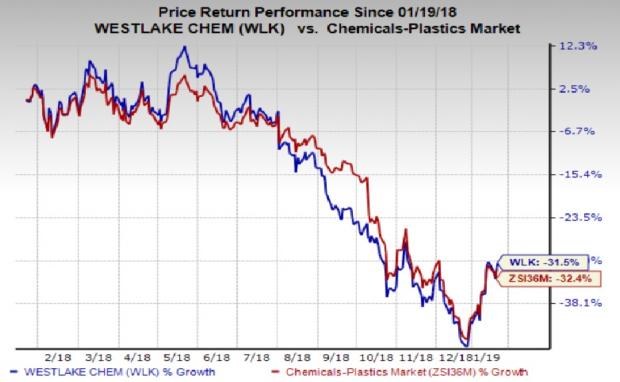 Westlake Chemical is benefiting from higher global demand for all major products in the Vinyls and Olefins segments. The company is seeing favorable demand trends for all of its key products including polyethylene, polyvinyl chloride (PVC) resin and caustic soda.

Moreover, higher prices for caustic soda along with increased sales volumes of PVC resin, caustic soda and polyethylene boosted the company's top line in third-quarter 2018. Investments to improve reliability and operational efficiency of assets will allow the company to fully leverage the improving fundamentals in the Vinyls market.

Westlake Chemical is making progress on the announced expansions in its Vinyls segment. The company, in early 2018, announced a 200-million pounds vinyl chloride monomer (VCM) expansion and a 750-million pounds PVC expansion at three of its chemical facilities. Two of the facilities are located in Germany while the other plant is located in Geismar, LA. This additional production capacity will help the company to address the growing needs of its global customers.

Westlake Chemical is also well placed to benefit from the Axiall acquisition. The buyout has led to diversification of its product portfolio and geographical operations and created a North American leader in Olefins and Vinyls. The company has realized $275 million of cost reduction synergies and savings since the completion of the buyout.

Through this move, Westlake Chemical’s compounding business now has facilities in the United States, Italy, France, Germany, China, Mexico, Japan, Spain and Vietnam. The company also has a world-class research facility in France along with several application laboratories.

Westlake Chemical purchases a significant quantity of feedstocks such as ethane, natural gas and ethylene. It is witnessing higher feedstock and energy costs. Increased ethane feedstock costs weighed on the Olefins segment in the third quarter. The company expects volatility in ethane prices to persist in the fourth quarter and in 2019.

Moreover, the company’s operations are exposed to planned turnarounds and unplanned outages. Operating margins in the olefins segment fell year over year in the first nine months of 2018, partly due to the impacts from turnaround activities. The company expects turnaround and maintenance activity in the fourth quarter to be in line with the third quarter and include roughly $10-million impact from outages at the Plaquemine facility.

Ingevity has an expected earnings growth rate of 21.5% for the current year and carries a Zacks Rank #1 (Strong Buy). Its shares have gained 17% in the past year. You can see the complete list of today’s Zacks #1 Rank stocks here.

Quaker Chemical has an expected earnings growth rate of 21.1% for the current year and carries a Zacks Rank #2 (Buy). Its shares have gained 25% in the past year.

Israel Chemicals has an expected earnings growth rate of 5.4% for the current year and carries a Zacks Rank #2. The company’s shares have rallied 32% over the past year.