U.S. manufacturing sector, which constitutes approximately 12% of the country’s GDP, has been witnessing resurgence under the Trump administration since 2017, shrugging off its lengthy spell of weak productivity and sluggish growth. At this stage, investment in manufacturing stocks with a favorable Zacks Rank and strong growth potential will be a prudent decision.

On Jan 3, the Institute for Supply Management (ISM) reported that the U.S. manufacturing expanded in December 2018 for the 116th consecutive month. Over the last 12 months, the average value of the manufacturing index has been pegged at 58.8, reflecting strong growth in the sector. Notably, any reading above 50 indicates overall growth of the manufacturing sector.

Importantly, Customers’ Inventories Index was pegged at 41.7 in December, reflecting 27th consecutive month of low (below 50 benchmark level) customer inventory. This will act as a major catalyst for the manufacturing sector in 2019.

The National Association of Manufacturers reported that about 500,000 manufacturing jobs are currently available in the United States. A recent study by the Manufacturing Institute and Deloitte has projected that by the end of 2025, the U.S. manufacturing sector will witness shortages of around 2 million skilled workers.

On Jan 16, The Wall Street Journal reported that the U.S. government is contemplating lifting some tariffs imposed on China. This will act as an incentive to the Asian economic giant to make deeper concessions to the United States. However, a Treasury Department spokesperson later denied the report.

At present, the U.S. economy is firmly placed on growth trajectory. Strong manufacturing goods orders are normally associated with stronger economic activity.  Considering these positives, investing in manufacturing stocks with strong growth potential will be a lucrative move. We narrowed down our choice to five stocks each of which carries either a Zacks Rank #1 (Strong Buy) or 2 (Buy).

The chart below shows price performance of our five picks in the past one year. 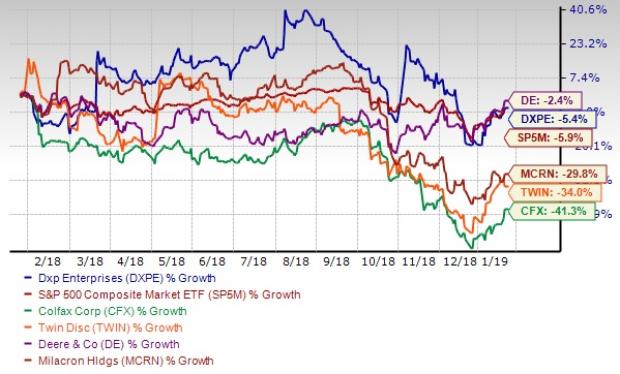 DXP Enterprises Inc. DXPE is a leading products and service distributor that adds value and total cost savings solutions to industrial customers in the United States, Canada, Mexico and Dubai. It sports a Zacks Rank #1. You can see the complete list of today’s Zacks #1 Rank stocks here. The company has expected earnings growth of 33.5% for current year. The Zacks Consensus Estimate for the current year has improved by 6.7% over the last 60 days.

Milacron Holdings Corp. manufactures, distributes and services engineered and customized systems within the plastic technology and processing industry. It flaunts a Zacks Rank #1. The company has expected earnings growth of 15.1% for current year. The Zacks Consensus Estimate for the current year has improved by 0.5% over the last 60 days.

Twin Disc Inc. TWIN designs, manufactures and sells heavy duty off-highway power transmission equipment. It carries a Zacks Rank #2. The company has expected earnings growth of 21% for current year. The Zacks Consensus Estimate for the current year has improved by 1.8% over the last 60 days.

Deere & Co. DE manufactures agricultural, construction, and forestry machinery, diesel engines, drivetrains used in heavy equipment, and lawn care equipment.  It carries a Zacks Rank #2. The company has expected earnings growth of 21.8% for current year. The Zacks Consensus Estimate for the current year has improved by 0.4% over the last 60 days.

Colfax Corp. CFX is a global supplier of fluid handling products, including pumps, fluid handling systems and specialty valves.  It carries a Zacks Rank #2. The company has expected earnings growth of 17% for current year. The Zacks Consensus Estimate for the current year has improved by 3.1% over the last 60 days.

Bet on These 5 Low Leverage Stocks to Secure Returns