With the acquisition, Everest Infrastructure Partners presently owns 300 cell tower assets in 45 states across the country. The buyout is the biggest of its kind by the real estate investment firm and has reportedly increased its tower holdings by about 50%. The acquired assets include numerous valuable locations in terrain and zoning-challenged environments, adjacent to Frontier’s central office facilities with easy access to transport services.

The divesture is part of the long-term strategy of the company to strengthen its balance sheet as it remains significantly challenged by slow economic recovery in its service territories. Moreover, Frontier seems to be grappling with the loss of legacy fixed telephony business to wireless and other offerings. The persistent decline in access lines continues to tighten local service revenues, which accounts for the bulk of Frontier’s total revenues.

In addition, high outstanding debt is a perennial concern for Frontier. Adjusted earnings have declined almost 200% from 2012 to 2017 as the company battles intense price wars. From 2013 to 2017, its cost of sales has witnessed a CAGR of 18.6%. We believe, if unchecked, higher costs and operating expenses will prove detrimental to the company's margins and profitability. It looks relatively more leveraged than the industry. Notably, its debt/capital ratio is currently pegged at 0.9, higher than 0.8 recorded by the industry.

The stock has also underperformed the industry in the past year with an average loss of 70.9% compared with a decline of 41.9% for the latter. 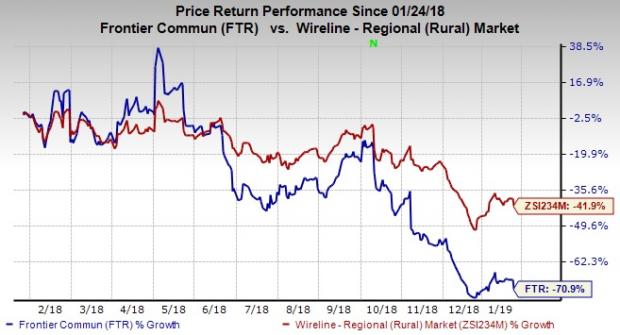 However, Frontier is leaving no stones unturned to derive benefits from the growing Business Service Segment to script a turnaround in its fortunes. Particularly, the company has been targeting the Small and Medium Businesses (SMBs). It has been enhancing its Ethernet capabilities lately and eyeing the retention of SMB customers with attractive plans. For instance, of late, the company has been boosting its product portfolio with a new cloud based Unified Communications as a Service offering, which complements its Ethernet and SD-WAN offerings. While the major thrust remains on increasing the uptake of its services by SMB customers, Frontier is expanding its Fiber-based broadband footprint to cater to the needs of bigger customers.

Whether these efforts will bear fruit in the long run remains to be seen.

Telefônica Brasil has long-term earnings growth expectation of 10.4%. It surpassed estimates thrice in the trailing four quarters, the average beat being 57.9%.