In the last reported quarter, the company’s profits rose roughly 5% year over year to $1,113 million or $2.85 per share. Adjusted earnings came in at $2.96 per share, which surpassed the Zacks Consensus Estimate of $2.73, translating into a positive earnings surprise of 10.8%.

Notably, LyondellBasell surpassed the Zacks Consensus Estimate in each of the trailing four quarters, the average positive earnings surprise being 10.8%.

The company’s shares have lost 26.7% in the past year, underperforming the industry’s 23% decline. 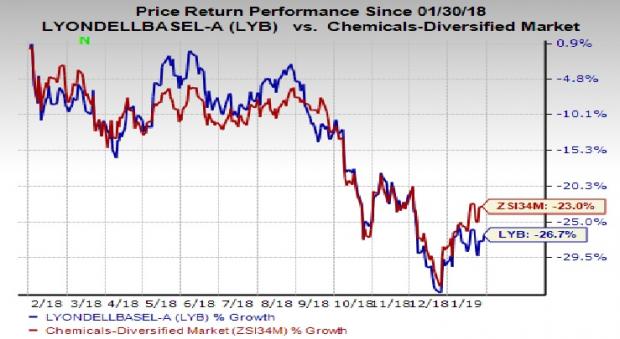 Can the company surprise investors again or is it heading for a pullback? Let’s see how things are shaping up for this announcement.

LyondellBasell, in its third-quarter call, stated that it expects to drive operational and business improvements in Refining, Technology as well as Intermediates and Derivatives businesses in the fourth quarter. The company is poised to benefit from increased access to markets, incremental synergies from the integration of A. Schulman acquisition and formation of the Advanced Polymer Solutions segment.

The Zacks Consensus Estimate for total fourth-quarter revenues is pegged at $9,222 million, reflecting year-over-year growth of 1%.

At the company's Olefins & Polyolefins – Americas segment, revenues are expected to rise 2% from the year-ago quarter as the Zacks Consensus Estimate is currently pegged at $2,857 million.

Revenues from the Olefins & Polyolefins – Europe, Asia, International division are likely to decline 10% year over year as the Zacks Consensus Estimate stands at $2,772 million.

Revenues for LyondellBasell’s Intermediates and Derivatives segment is projected to rise 1.1% from the prior-year quarter’s tally as the Zacks Consensus Estimate is pegged at $2,256 million.

The Zacks Consensus Estimate for revenues at the Refining segment is pegged at $1,863 million, reflecting a 11.8% decrease on a year-over-year basis.

The Technology segment sales are expected to fall 4.8% year over year in the to-be-reported quarter as the Zacks Consensus Estimate is pinned at $119 million.

LyondellBasell is executing its expansion projects to leverage the U.S. natural gas liquids advantage. The company’s operational improvement initiatives are expected to drive earnings in the December quarter. Continued strong demand is also expected to support results in the Olefins & Polyolefins – Americas segment.

The buyout of A. Schulman is also expected to create significant synergies. The buyout doubles the size of LyondellBasell's existing compounding business. The company is making progress with the integration of the acquisition and expects to realize $32 million in annual run-rate synergies.

However, LyondellBasell’s operations are subject to maintenance outages, which are affecting results. The company expects roughly $25-million impact from downtime associated with planned maintenance at its German cracker in the fourth quarter at its Olefins & Polyolefins – Europe, Asia, International segment. This may impact volumes at the segment.

Moreover, maintenance at one of LyondellBasell’s propylene oxide plants in Texas reduced EBITDA by roughly $20 million in the third quarter at the Intermediates and Derivatives unit and is expected to lower margins by roughly $25 million in the fourth quarter.

Planned maintenance at the company’s refinery also impacted EBITDA by around $20 million in the third quarter and is expected to hurt margins by $45 million in the fourth quarter.

The company is also seeing a rise in feedstock costs, which is hurting margins in the Olefins & Polyolefins – Europe, Asia, International division. Moreover, LyondellBasell faces challenges in the European markets for polymers with sluggish demand growth and ample supply. It expects market pressure to continue in the fourth quarter along with a lower demand due to typical seasonal effects.

Our proven model does not show that LyondellBasell is likely to beat estimates this quarter. That is because a stock needs to have a positive Earnings ESP and a Zacks Rank #1 (Strong Buy), 2 (Buy) or 3 (Hold) for this to happen. That is not the case here, as you will see below:

Earnings ESP: Earnings ESP for LyondellBasell is +6.17%. This is because the Most Accurate Estimate is currently pegged at $2.26 while the Zacks Consensus Estimate stands at $2.13. You can uncover the best stocks to buy or sell before they’re reported with our Earnings ESP Filter.

Zacks Rank: LyondellBasell currently carries a Zacks Rank #4 (Sell). Note that we caution against stocks with a Zacks Rank #4 or 5 (Strong Sell) going into the earnings announcement, especially when the company is seeing negative estimate revisions.

Franco-Nevada Corporation (FNV - Free Report) has an Earnings ESP of +3.05% and carries a Zacks Rank #2. You can see the complete list of today’s Zacks #1 Rank stocks here.

Teck Resources Limited (TECK - Free Report) has an Earnings ESP of +6.03% and carries a Zacks Rank #3.