Crude oil prices have been stabilizing since the beginning of 2019 buoyed by the decision of OPEC and Russia-led oil exporters to cut production levels, lower U.S. crude oil supplies and supply related problems in Iran and Venezuela.

Additionally, any positive development in the ongoing trade tensions between the United States and China will be a major boost to oil prices. At this stage, it will be prudent to invest in oil stocks with a favorable Zacks Rank.

The OPEC and Russia-led oil exporters have decided to cut crude oil supplies by 1.2 million barrels per day (bpd) in 2019. This massive cut will aid in stabilization of oil prices. In a separate development, Qatar decided to quit OPEC in a bid to focus more on natural gas production than crude oil, indicating lower crude oil supply. In December 2018, oil supplies from OPEC nations plunged by 751,000 bpd to nearly 31.6 million bpd.

The sanctions will block diversion of Venezuelan oil assets worth $7 billion by the country’s sitting President Maduro. The United States will continue to support Interim President Juan Guaidó of Venezuela.

Oil exports from Libya fell by 172,000 bpd to 928,000 bpd in December. Decline in oil supply took place after a group of armed protesters and aggrieved workers took over the country's largest oil field. Meanwhile, oil export dropped by 159,000 bpd to just under 2.8 million bpd in Iran owing to the imposition of U.S. sanctions.

Additionally, on Jan 30, the U.S. Energy Information Administration (“EIA”) reported that domestic crude supplies increased by 900,000 barrels for the week ended Jan 25. However, this figure was lower than 1.1 million barrels predicted by the American Petroleum Institute.

The United States and China is continuing negotiation’s to reach an amicable solution to ten month long tariff dispute. Although, no concrete solution has emerged so far, a series of meetings is likely to pave the way for a permanent solution in the near future. The two countries are currently observing a trade truce which will come to end on Mar 1.

Crude oil prices are likely to remain northbound in the near term. Consequently, investment in oil stocks will be lucrative. However, picking winning stocks may be difficult.

This is where our VGM Score comes in handy. Here V stands for Value, G for Growth and M for Momentum and the score is a weighted combination of these three scores. Such a score allows you to eliminate the negative aspects of stocks and select winners. However, it is important to keep in mind that each Style Score will carry a different weight while arriving at a VGM Score.

We have narrowed our search on four such stocks each carrying a Zacks Rank #2 (Buy) and VGM Score of either A or B. You can see the complete list of today’s Zacks #1 Rank (strong Buy) stocks here.

The chart below shows price performance of our four picks in the last three months. 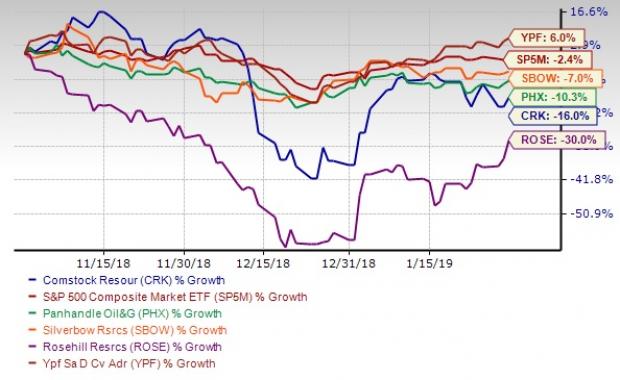 Comstock Resources Inc. CRK is an independent energy company, engaged in the acquisition, exploration and development of oil and gas resources primarily in Texas and Louisiana. It has a VGM Score of B. The company has expected earnings growth rate of 102.3% for the current year.

SilverBow Resources Inc. (SBOW - Free Report) is an energy company, engaged in the exploration, development, and production of oil and gas from the Eagle Ford Shale in South Texas. It has a VGM Score of A. The company has expected earnings growth rate of 67.3% for the current year.

Rosehill Resources Inc. ROSE is an independent oil and natural gas company, focused on the acquisition, exploration, development, and production of unconventional oil and associated liquids-rich natural gas reserves in the Permian Basin.It has a VGM Score of B. The company has expected earnings growth rate of 250% for the current year.

YPF Sociedad Anonima YPF is an energy company, operates in the oil and gas upstream and downstream activities in Argentina. It has a VGM Score of A. The company has expected earnings growth rate of 29% for the current year.