5 Winners From Trump's State of the Union Address

Investors kept an eye on President Trump’s State of the Union address for hints on whether the U.S. stock market will be able to maintain the upward trajectory established so far this year or tensions from the past will resurface.

In the speech, the President appealed for greater unity among Americans and vowed to boost the Pentagon’s budget. He also urged the Congress to rebuild America’s crumbling infrastructure. Hence, it seems sensible to invest in these areas that can make the most of Trump’s presidency.

Trump expressed interest to rebuild the U.S. military by bumping up Pentagon’s budget. He also plans to reevaluate military alliances and agreements with foreign nations.

Trump, by the way, did approve two defense-friendly budget bills that helped increase the Pentagon’s spending power to $700 billion in 2018 and $717 billion in 2019. Trump said that “for years, the United States was being treated very unfairly by NATO, but now we have secured a $100 billion dollar increase in defense spending from NATO allies.”

Lest we forget, Trump had earlier threatened to trim U.S. military support if its allies didn’t raise defense spending. And why not? The United States had accounted for 51.1% of NATO’s combined GDP and has contributed more funds to NATO than Germany, France, Italy, Spain, the United Kingdom and Canada taken together.

Secretary of Defense Patrick Shanahan, in the meantime, chipped in and said that “in his State of Union address, President Trump reaffirmed his unwavering commitment to support our troops and to protect American national security interests at home and abroad. Under President Trump’s leadership, we are focused on the full implementation of the National Defense Strategy: increasing lethality, strengthening alliances and partnerships, and reforming the way we do business.”

Trump also addressed the recent withdrawal from the nuclear weapons treaty that was signed by President Ronald Reagan and Soviet leader Mikhail Gorbachev, prohibiting the development of ground-launched nuclear missiles with ranges of 310 miles to 3,420 miles.

The agreement forced many defense projects to end. But now, America is looking forward to develop a state-of-the-art missile defense system. And it’s only because Russia repeatedly violated the agreement by building the banned weapon. Trump announced that “the United States is officially withdrawing from the Intermediate-Range Nuclear Forces Treaty, or INF Treaty.”

Last but not the least, Trump claimed that American astronauts will go back to space with American rockets.

Trump Calls for a Push on Infrastructure Outlays

Trump in his speech, by the way, has also asked for a bipartisan infrastructure push. He urged both the parties to come together in rebuilding America’s decaying infrastructure. Trump told Congress and government leaders that “I know that Congress is eager to pass an infrastructure bill, and I am eager to work with you on legislation to deliver new and important infrastructure investment.”

Trump added that increasing infrastructure spending is not an option but a necessity. He had already called for $1.5 trillion over a decade for infrastructure projects during his presidential campaign. The plan was primarily centered on using the $200 billion in federal funds to spur massive infrastructure investments in roads, highways, ports and airports. The comprehensive bill will also address issues related to drinking and waste water system, energy and rural infrastructure, veterans’ hospitals, to name a few.

Trump’s State of the Union speech focused on increasing defense outlays and rebuilding infrastructure. Given the positives, doubling down on the hottest stocks from such areas seems judicious. We have, thus, chosen five stocks that flaunt a Zacks Rank #1 (Strong Buy) or 2 (Buy).

The Boeing Company (BA - Free Report) designs, develops, manufactures, sales, services, and supports commercial jetliners, military aircraft, satellites, missile defense, human space flight, and launch systems and services. The company currently has a Zacks Rank #1. The Zacks Consensus Estimate for its current-year earnings has climbed 6.6% over the past 60 days. The stock’s expected earnings growth for the current year is 20.4%, higher than the Aerospace - Defense industry’s expected growth of 10.5%. The company has outperformed the broader industry so far this year (+27.2% vs +17.9%).

Air Industries Group (AIRI - Free Report) is an aerospace and defense company. The company currently has a Zacks Rank #2. The Zacks Consensus Estimate for its next-year earnings has risen 9% over the past 60 days. The stock’s expected earnings growth for the current year is 81.5%, way higher than the Aerospace - Defense industry’s estimated growth of 10.5%. The company has outpaced the broader industry on a year-to-date basis (+51% vs +17.8%).

Northrop Grumman Corporation (NOC - Free Report) provides products in the areas of autonomous systems, cyber, space, strikes, and logistics and modernizations. The company currently has a Zacks Rank #2. The Zacks Consensus Estimate for its current-year earnings has moved 9.5% up over the past 60 days. The stock’s expected earnings growth for the next quarter is 17.6%, in contrast to the Aerospace - Defense industry’s projected decline of 3.5%. The company outperformed the broader S&P 500 so far this year (+13.7% vs +8.8%). You can see the complete list of today’s Zacks #1 Rank stocks here.

Lowe's Companies, Inc. (LOW - Free Report) operate as a home improvement retailer. The company currently has a Zacks Rank #2. The Zacks Consensus Estimate for its next-year earnings has risen 2.5% over the past 60 days. The stock’s expected earnings growth for the next quarter is 12.6%, higher than the Building Products - Retail industry’s estimated growth of 5.5%. The company has outperformed the broader industry in the past two-year period (+35.8% vs +30.8%).

EMCOR Group, Inc. (EME - Free Report) provides electrical and mechanical construction, and facilities services. The company currently has a Zacks Rank #2. The Zacks Consensus Estimate for its current-year earnings has climbed 0.2% over the past 60 days. The stock’s expected earnings growth for the current year is 20.2%, higher than the Building Products - Heavy Construction industry’s projected growth of 19.3%. The company has outperformed the broader industry so far this year (+10.7% vs +7.1%). 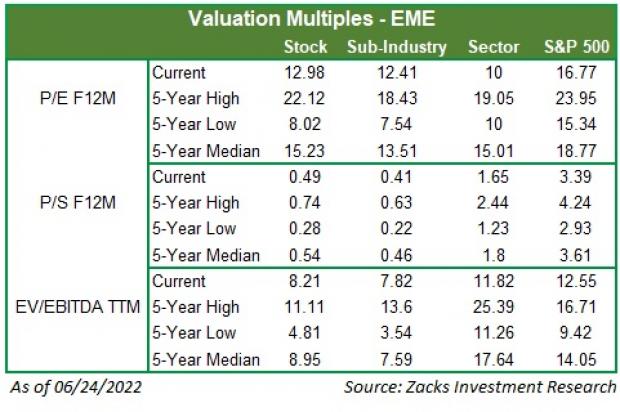