Hi-Crush Partners LP incurred net loss of $9.9 million or 8 cents per share in fourth-quarter 2018, against net income of $41.9 million or 47 cents in the year-ago quarter. The figure was wider than the Zacks Consensus Estimate of a loss of 6 cents.

Revenues plunged roughly 25% year over year to $162.2 million. Nevertheless, the figure surpassed the Zacks Consensus Estimate of $149.3 million. Lower pricing and reduced volumes are attributable to decline in revenues.

Notably, lower pricing was the result of the slowdown in demand for frac sand that started during the third quarter and continued into the fourth quarter, due to reduced well completion activity.

As of Dec 31, 2018, the partnership had 16 PropStream container crews in the Permian Basin and Marcellus/Utica. Also, it had 8 FB silo systems operating in the Permian. During the fourth quarter, the deployment of PropStream crews was affected by delays in contract start-ups due to budget timing considerations of customers. Hi-Crush successfully completed field testing for the new FB Atlas top-fill conveyor system with an existing E&P customer in the Permian.

On Jan 7, the partnership’s board decided to suspend quarterly distribution considering the challenging environment.

The partnership expects total sales volumes for the first quarter in the range of 2.4-2.6 million tons. Notably, the projections reflect a sequential increase driven by additional volumes sold from the second Kermit facility along with increasing Northern White volumes associated with the new E&P contracts.

Hi-Crush’s shares have plunged 63.4% in the past year compared with the industry’s 4.4% decline. 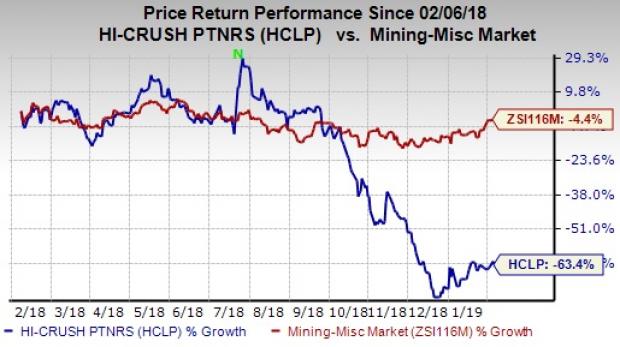 With battery prices plummeting and charging stations set to multiply, one company stands out as the #1 stock to buy according to Zacks research. It's not the one you think.