Goldcorp (GG) to Report Q4 Earnings: What's in the Cards?

Goldcorp Inc. is slated to release fourth-quarter 2018 results on Feb 13.

In the last reported quarter, the company delivered a negative earnings surprise of 300%. Adjusted loss of 8 cents per share was wider than the Zacks Consensus Estimate of a loss of 2 cents.

Revenues fell around 28% year over year to $621 million. The figure also missed the consensus mark of $714.5 million.

Notably, Goldcorp missed the Zacks Consensus Estimate in each of the trailing four quarters with an average negative surprise of 91.2%. 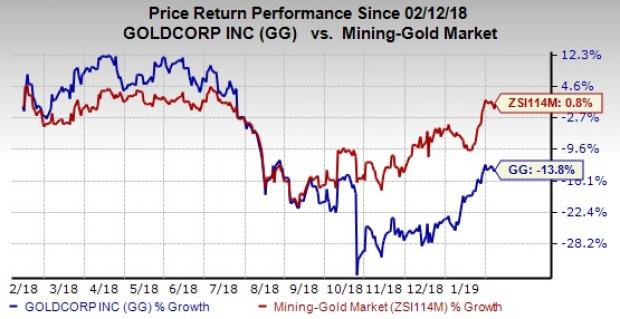 In January, Goldcorp announced that it has achieved 2018 production and cost guidance.

Per the company, gold production for the fourth quarter of 2018 was 630,000 ounces. This marks 25% sequential growth form third quarter and also surpasses the company’s previously announced projection.

Gold production for the full year is expected to be around 2.29 million ounces, higher than the company’s previous guidance of 2.28 million ounces. All-in sustaining costs (AISC) for 2018 are projected to be in line with the revised projection of $850 per ounce.

Notably, the Zacks Consensus Estimate for total sales is currently pegged at $853 million, indicating an expected increase of 37.4% sequentially and flat year over year.

The company also provided important updates on major projects. Production at Eleonore was 6,600 tons of ore per day at the end of the year. The mine produced an average of 35,000 ounces per month in the fourth quarter.

Among other significant developments, the company’s Pyrite Leach Project at Penasquito has achieved commercial production in the fourth quarter. Also, the project was completed ahead of schedule and below budget.

Notably, Newmont Mining Corp. (NEM - Free Report) and Goldcorp have entered into a definitive deal that enables Newmont to acquire all of the outstanding common shares of the latter in a stock-for-stock transaction valued at $10 billion.

The deal combines two industry leaders into Newmont Goldcorp, creating an unparalleled portfolio of projects, operations, reserves and exploration opportunities in the gold mining sector. The new entity is expected to generate annual pre-tax synergies worth up to $100 million along with additional cost and efficiency opportunities. The deal has been unanimously approved by the boards of the companies and is expected to close in the second quarter of 2019.

Our proven model does not conclusively show that Goldcorp is likely to beat estimates this quarter. That is because a stock needs to have a positive Earnings ESP and a Zacks Rank #1 (Strong Buy), 2 (Buy) or 3 (Hold) for this to happen. That is not the case here, as you will see below:

Earnings ESP: Earnings ESP for Goldcorp is -19.23%. The Zacks Consensus Estimate is currently pegged at 2 cents. You can uncover the best stocks to buy or sell before they’re reported with our Earnings ESP Filter.

Note that we caution against stocks with a Zacks Rank #4 (Sell) or #5 (Strong Sell) going into the earnings announcement, especially when the company is seeing negative estimate revisions.

Here are some companies in the same space you may want to consider as our model shows that they also have the right combination of elements to post an earnings beat this quarter.