JPMorgan Chase & Co. (JPM - Free Report) plans to launch its own cryptocurrency called the "JPM Coin" in order to help corporate clients instantly settle payments between themselves. With this move, JPMorgan becomes the first global bank to incorporate blockchain technology into its system.

The “JPM Coin” will be transferable over a blockchain network. Whenever a customer deposits money at the bank, he will be issued the digital coin. The coin can then be used for transferring money to other corporate clients over the same network.

Each of the “JPM Coin” will be redeemed for a single U.S. dollar. Hence, its value will not fluctuate, making it similar in concept to the “stablecoins”.

Using these digital coins, customers at JPMorgan will be able to settle transactions instantaneously, thereby, reducing settlement risk. Moreover, the bank feels that this will help in mitigating counterparty risk and decrease capital requirements.

Initially, JPMorgan’s CEO, Jamie Dimon was not very keen on using the blockchain network. In fact, in 2017, Dimon criticized bitcoins, calling it a "fraud" and saying that cryptocurrencies are "worse than tulips bulbs."

However, it seems that he regrets his decision now. While discussing “JPM Coin”, the bank informed that it would be in favor of “cryptocurrencies as long as they are properly controlled and regulated.”

Umar Farooq, JPMorgan's head of digital treasury services and blockchain stated, “As a globally regulated bank, we believe we have a unique opportunity to develop the capability in a responsible way with the oversight of our regulators.”

Notably, this “JPM Coin” is just a prototype by the bank and JPMorgan plans to roll it out only on its in-house blockchain technology, Quorum, thereby, making it operational to only a few of its clients for now. However, once successful, the company intends to make it operable on all standard blockchain networks.

While “JPM Coin” comes as the first cryptocurrency that has been created by a U.S. bank, other banks like Barclays PLC BCS, Credit Suisse Group AG CS, HSBC Holdings plc HSBC and a few more continue to experiment with the blockchain technology.

JPMorgan remains on track for top-line growth, given its continued efforts to expand into new markets and focus on the card business. Moreover, higher interest rates and increasing loan demand are expected to support profitability.

Shares of JPMorgan have lost 10.7% over the past year compared with 13.8% decline of the industry. 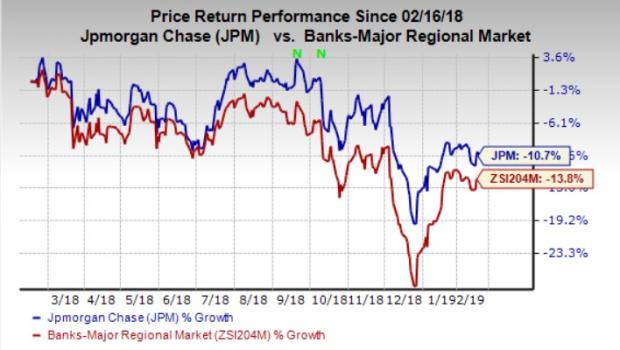