Fitbit Inc. is set to report fourth-quarter 2018 results on Feb 27. Notably, it surpassed the Zacks Consensus Estimate in three out of the trailing four quarters, recording average positive surprise of 174.4%.

In the last reported quarter, Fitbit reported adjusted earnings of 4 cents per share, surpassing the Zacks Consensus Estimate by 5 cents.

Management remained optimistic about smartwatch sales and expects to increase its market share in this space in the coming quarters.

The company's shares have gained 27.5% in the past 12 months, underperforming its industry’s rally of 53.7%.

The company’s robust and expanding product portfolio is expected to continue aiding its momentum in the fitness wearables market. Fitbit’s new product introductions, along with sustained focus on health and wellness sector are expected to aid fourth-quarter results.

Recently, the company enhanced the features of Fitbit Ionic: adidas edition and Fitbit Versa smartwatches, by introducing the OS 3.0 update. The latest update is aimed at luring customers via innovative apps, partnering with popular fitness brands and making mammoth of health-care data available.

Management remains optimistic about the increasing demand for its smartwatch wearables. The company’s recovery initiatives, that include cost structuring and focus on new smartwatches, are likely to boost the demand for its products.

We believe the company’s strong efforts toward improvement of software and services for offering more personalization to customers, as well as achieving greater integration into the healthcare ecosystem are major positives.

All these strong endeavors are expected to aid fourth-quarter results.

Fitbit sold 3.5 million devices in the third quarter, up 29.6% sequentially. New products launched over the past 12 months contributed 62% to the company’s revenues.

For the to-be-reported quarter, Fitbit expects to sell 5.1 million devices, which is remarkable. The recently launched products namely Fitbit Versa, Fitbit Charge 3, Fitbit Ace and Fitbit Aria 2 are anticipated to have benefited the company’s fourth-quarter revenues.

Fitbit, which became a prominent name for simple fitness wearables, has been hurt by massive competition in the market. It faces competition in both high and low-end product range. The company competes with Apple Watch on the high-end front. On the lower end, fitness-tracking devices from Jawbone, Garmin Ltd. GRMN and Xiaomi pose tough competition.

For the fourth quarter of 2018, Fitbit expects revenues to exceed $560 million, roughly flat on a year-over-year basis. The Zacks Consensus Estimate for the same is pegged at $567.7 million.

According to the Zacks model, a company with a Zacks Rank #1 (Strong Buy), 2 (Buy) or 3 (Hold) has a good chance of beating estimates if it also has a positive Earnings ESP. You can uncover the best stocks to buy or sell before they’re reported with our Earnings ESP Filter.

Currently, Fitbit has a Zacks Rank #3 and an Earnings ESP of 0.00%, which does not indicate a likely positive earnings surprise. Sell-rated stocks (Zacks Rank #4 or 5) are best avoided. 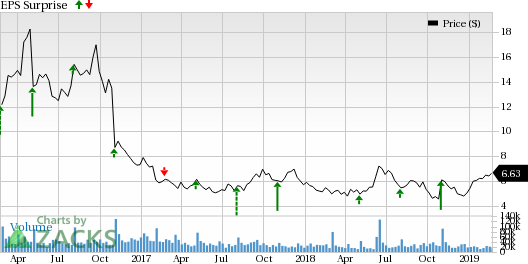 Here are some stocks that you may want to consider, as our model shows that these have the right combination of elements to post an earnings beat in the to-be-reported quarter.

Frontline Ltd. FRO has an Earnings ESP of +4.17% and a ZacksRank #1. You can see the complete list of today’s Zacks #1 Rank stocks here.