Shares of ImmunoGen, Inc. IMGN fell almost 47% after its ovarian cancer candidatefailed to meet the primary endpoint of progression-free survival (PFS)in a phase III study. The FORWARD 1 study evaluated the efficacy of mirvetuximab soravtansine as a single-agent therapy compared to chemotherapy for the treatment of patients with platinum-resistant ovarian cancer whose tumors express high or medium levels of FR alpha and who have received up to three prior treatment regimens.

The study did not meet the primary endpoint of PFS in the entire study population as well as the pre-specified subset of patients with high FRα expression.

Shares of the company have declined 78.1% in the past year compared with the industry’s decline of 16.3%. 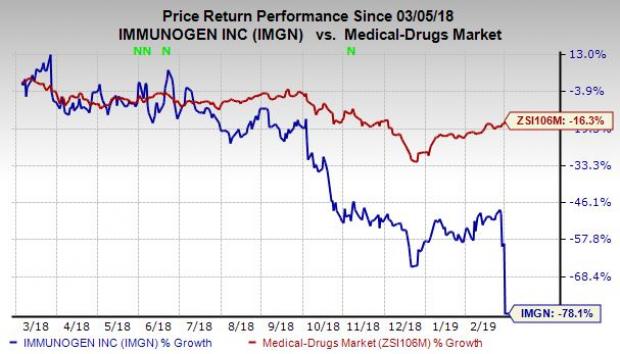 Although the study did show that in the entire study population, the confirmed overall response rate was higher for mirvetuximab soravtansine than for chemotherapy, there was no significant difference in PFS.

The overall response rate for the company's treatment was higher than the study in which patients were treated with chemotherapy. However, there was no significant difference in overall survival rates.

The company will further assess data from the FORWARD I study to determine potential future steps with a monotherapy approach.