Consumer ETFs: Bull Market Winners With Room to Run in 2019

The S&P 500 bull market turned 10 last week. Around 10 years ago, stocks bottomed out only to log an amazing recovery since the Great Depression.

The Fed’s quantitative easing and rock-bottom interest rate policy along with the U.S. government’s Troubled Asset Relief Program (TARP) helped in reviving the market. While several sectors performed tremendously well, consumer discretionary emerged as one of the toppers.

The U.S. economy may be poised for a slowdown, while U.S. consumers seem undeterred. A dovish Fed and a rallying stock market made consumers confident about the economic outlook.

According to the Conference Board, the consumer confidence index climbed to 131.4 in February from a revised 121.7 in January. The reading topped Bloomberg survey of economists that called for a rise to 124.9. The measure gauging Americans’ outlook on present conditions spurted to an 18-year high while consumer expectations recorded the largest monthly gain since 2011.

The Fed is likely to take a patient approach to future rate hikes, keeping rates at subdued levels. Also, annual inflation rate in the United States slowed for three months in a row to 1.6% in January of 2019. It was the lowest rate since June of 2017 versus market expectations of 1.5%. A dovish Fed and subdued inflation make an intriguing case for investing in consumer stocks.

Oil prices too are not likely to shoot extremely high this year given renewed global growth worries and possible threat to demand. Savings at gas stations should also result in a fatter consumer wallet. 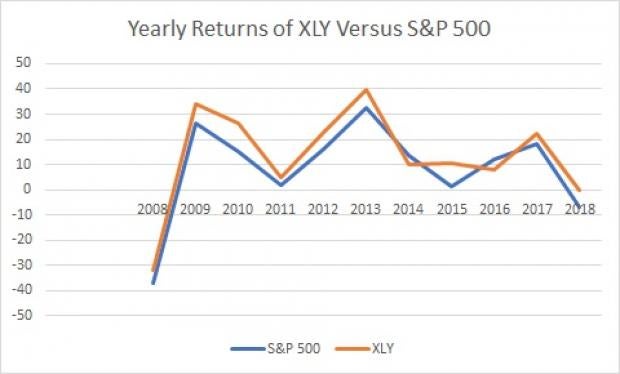 What Do Historic Annual Returns Say?

Investors should also note that consumer discretionary ETF XLY beat SPY in eight out of the 10 past years except for 2014 and 2016. While rising rate worries have probably hurt the space in 2014, the likelihood of an oil price jump amid OPEC output cut deal weighed on the space in 2016. As a result, we may conclude that stable oil, patient Fed and a decently-growing U.S. economy will prove conducive to consumer ETFs in 2019 too (read: Dovish Fed Minutes Should Boost These ETFs).

Below we highlight a few consumer discretionary ETFs that breezed past SPY’s 9.8% year-to-date return (as of Mar 8, 2019).