HOLX vs VAR: Which MedTech Stock is a Better Investment Pick?

Hologic, Inc. (HOLX - Free Report) and Varian Medical Systems, Inc. (VAR - Free Report) are solid contenders in the U.S. MedTech space, which is expected to reach $409.5 billion worth by 2023 at a CAGR of 4.5%. Analysts believe that 2019 will prove profitable for the U.S. medical device companies, courtesy of a 2.3% Medical Device tax abatement along with focus on AI and cybersecurity.

Meanwhile, it is difficult to make a choice between the above-mentioned Medical instrument companies as both currently carry a Zacks Rank #2 (Buy). You can see the complete list of today’s Zacks #1 Rank (Strong Buy) stocks here.

However, we make a detailed analysis of the companies’ fundamentals to determine which has a slight edge over the other.

Massachusetts-based Hologic develops, manufactures and supplies diagnostics, medical imaging systems and surgical products, which cater to healthcare needs of women. The company is focused on building mammography systems for breast examination and osteoporosis assessment. Meanwhile, California-based Varian Medical Systems is the world’s leading provider of radiotherapy, radiosurgery, proton therapy and brachytherapy for treating cancer and other medical conditions. It is also a premier supplier of X-Ray tubes for medical, scientific and industrial applications.

Over the past year, Hologic’s shares have gained 22.8% compared with Varian Medical’s 7.9% rally. The Medical Instruments industry has grown 5.3% in the same time frame. Meanwhile, the S&P 500 index rose by 1.4%. 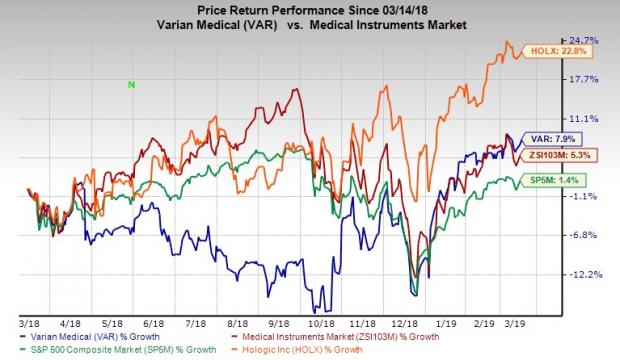 The Zacks Consensus Estimate for Hologic’s current-year earnings stands at $2.41, suggesting an improvement of 8.1% year over year. The same for Varian Medical is projected at $4.7, showing year-over-year growth of 6.3%.

The Zacks Consensus Estimate for Hologic’s current-year revenues is pegged at $3.32 billion, suggesting growth of 3.2% from the previous year. The same for Varian Medical is pegged at $3.12 billion, reflecting rise of 7%.

Hologic’s management is impressed with continued growth in the core Molecular Diagnostics sub-segment, which accounted for roughly 55.4% of total Diagnostics revenues in the fiscal first quarter. The company is experiencing global growth on expanding market share and utilization of fully-automated Panther system along with continued solid uptake of Aptima women's health products. Per management, the company has more than 15 FDA-cleared or CE-marked tests to run on the Panther or Panther Fusion platforms.

Meanwhile, Varian Medical’s strong overseas presence is expected to enable it to leverage this opportunity in emerging markets. Precisely, the company’s Oncology Systems segment has been making noteworthy progress worldwide. In Asia, Varian Medical received orders for eight systems from the Philippines Department of Health. The company also opened a manufacturing facility in Jundiai, Brazil and delivered its first locally manufactured TrueBeams to Oncoclinicas in the country.

The above analysis shows that despite being close contenders, Hologic scores higher than Varian Medical when it comes to growth projections and fundamentals.

Veeva Systems’ long-term earnings growth rate is projected at 14.8%. The stock presently has a Zacks Rank #2.