However, the Fed has also reduced the growth projection of U.S. GDP, while raising its previous projection for unemployment. Notably, significant decline in yields on 10-Year U.S. Treasury Note, following the Fed’s decision, may got go well with the U.S. economy. Moreover, conflicting news on trade war are coming almost daily.

Although the Fed is relatively bullish on the fundamentals of the U.S. economy and recession in the near future is a remote possibility, the central bank is concerned about a global economic downturn especially in China and Eurozone -- the two largest trading blocks of the United States. This might cool down the country’s economic fortunes.

Flattening of the Treasury Yield Curve

The yield curve (which measures interest at any given point of time for bonds of same quality but different maturity dates) of government bonds are generally upward sloping, implying a higher rate of interest is needed for individuals to hold longer maturity bonds.

On Mar 20, President Donald Trump said that tariffs which the U.S. government has already imposed on Chinese goods will continue for an indefinite time period until China complies to a trade deal, which will satisfy all concerns of the Trump administration.

According to Trump, "We're not talking about removing tariffs, we're talking about leaving them for a substantial period of time, because we have to make sure that if we do the deal with China that China lives by the deal." However, Trump also mentioned that negotiations with China for a trade deal "is coming along nicely."  The IMF cautioned that prolonged trade conflict between the United States and China could result in global economic slowdown in 2019.

At this juncture, investment in defensive sectors such as utilities, telecom and consumer staple will be fruitful. Defensive stocks are generally immune to the vagaries of the economic cycle. It's because these companies provide basic services that can never go out of demand. We have narrowed down our search to five stocks with a Zacks Rank #1 (Strong Buy). You can see the complete list of today’s Zacks #1 Rank stocks here. 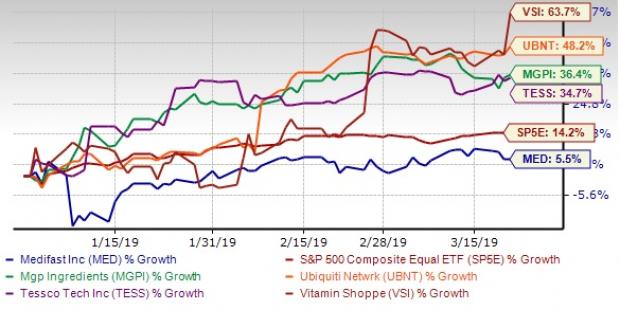 TESSCO Technologies Inc. TESS is a leading provider of the services, products and solutions required to build, operate, maintain and use wireless voice, data, messaging, location tracking and Internet systems. The stock has surged 34.7% year to date. The company has an expected earnings growth rate of 38.2% for the current year. The Zacks Consensus Estimate for the current year has improved 22.6% over the last 60 days.

MGP Ingredients Inc. MGPI produces and supplies distilled spirits, and specialty wheat proteins and starch food ingredients. The stock has surged 36.4% year to date. The company has an expected earnings growth rate of 20.3% for the current year. The Zacks Consensus Estimate for the current year has improved 6.5% over the last 60 days.

Vitamin Shoppe Inc. VSI operates as an omni-channel specialty retailer and contract manufacturer of nutritional products in the United States and internationally. The stock has surged 63.7% year to date. The company has an expected earnings growth rate of 92.3% for the current year. The Zacks Consensus Estimate for the current year has improved 117.4% over the last 60 days.

Ubiquiti Networks Inc. UBNT is engaged in the business of designing, manufacturing and selling broadband wireless solutions worldwide. The stock has surged 48.2% year to date. The company has an expected earnings growth rate of 26.3% for the current year. The Zacks Consensus Estimate for the current year has improved 13.1% over the last 60 days.

Medifast Inc. (MED - Free Report) manufactures and distributes weight loss, weight management, healthy living products, and other consumable health and nutritional products. The stock has risen 5.5% year to date. The company has an expected earnings growth rate of 41.1% for the current year. The Zacks Consensus Estimate for the current year has improved 11.5% over the last 60 days.

US Marijuana Industry to Flourish in 2019: Who Gains?