The index enjoyed quite a positive week even as a yield curve inversion weighed on broader markets. However, fears of a global economic slowdown and an impending U.S. recession irked investors.

The uncertainty over the British parliament’s position on Brexit also dampened investor sentiments. However, a temporary surge in long-term bond yields and fresh optimism over a trade deal outweighed negative sentiments to some extent.

The index lost 1.8% last Friday, suffering its largest single-day loss since Jan 3. On Mar 22, yield on benchmark 10-year US Treasury Note declined to 2.437%, its lowest since January 2018. However, yield on short-term 3-month U.S. Treasury Note stood at 2.459%. A yield inversion for the 3-month and 10-year bond yields is recognized by several economists as a clear indication of a near-term recession.

The index declined 1.3% last week. The Fed’s decision to adopt a dovish stance and its move to lower domestic growth projections dented investors’ confidence. An economic slowdown in the Eurozone and Brexit-related chaos added to investors’ anxieties. Yield curve inversion resulted in a Wall Street rout on Friday.

The index gained 0.1% on Monday despite fears of a global economic slowdown and an impending U.S. recession. Markets were extremely choppy in the absence of any progress on the trade war front.

The lack of bullish economic data also weighed on investors. On Mar 25, the yield curve inversion extended further as the yield on the 10-year bond declined to 2.388%, its lowest since December 2017.

Oil stocks also gained post supply constraints in global oil production. However, these gains were partially offset by weak U.S. economic data. Consumer confidence for March declined to 124.1 from 131.4 in February. Housing starts declined 8.7% in February. This is the highest percentage decline in eight months.

The index declined 0.1% on Wednesday, after the yield on the 10-year US Treasury Note fell on global growth concerns. On Mar 27, yield on benchmark 10-year US Treasury Note declined to 2.39%, its lowest level since December 2017. In the U.K., Brexit drama continued as prime minister Theresa May offered to resign if the Parliament approves her deal.

The index gained 0.4% on Thursday following fresh optimism about U.S.-China trade talks. According to Reuters, China has made unprecedented offers to resolve major points of conflict, such as the allegation of forced technology transfers.

Apple TV+, the much-awaited streaming service exclusive to the new Apple TV app, will be available to users this fall. The ad-free service will include original movies, shows and documentaries from popular Hollywood content providers.

The Zacks Rank #3 (Hold) company’s latest ad-free gaming subscription service, Apple Arcade, will be available this fall in more than 150 countries. The service, which will offer more than 100 new and existing games, can be accessed on Apple devices like iPhone, iPad, Mac and Apple TV.

Apple Card, which will be available to U.S. customers this summer, will be integrated into the Apple Wallet app. The card is designed to help individuals have a better understanding of the cost of services and payment processes. (Read: Apple Adds Streaming, News & Gaming to Services Portfolio)

JPMorgan is set to cut hundreds of jobs in its asset and wealth management division, with most of the employees in support roles across the unit, per Bloomberg. These global reductions come after the company’s periodic review of staffing, per a person familiar with the matter.

Darin Oduyoye, a spokesman for the bank stated, “It is normal course of business for us to review our staffing annually to ensure appropriate levels, and adjust as necessary.” Per a regulatory filing, Zacks Rank #3 JPMorgan’s asset and wealth management division had nearly 24,000 employees at the end of 2018. (Read: JPMorgan to Trim Wealth Jobs After Periodic Review of Staff)

Johnson & Johnson (JNJ - Free Report) announced that it has filed a type II variation application with the European Medicines Agency (EMA), seeking approval for the label expansion of Darzalex (daratumumab) as a combination therapy for an expanded patient population.

J&J is looking for a nod with respect to Darzalex in combination with Celgene’s Revlimid (lenalidomide) and dexamethasone (Rd) for treating the newly-diagnosed multiple myeloma (MM) patients, who are ineligible for autologous stem cell transplant (ASCT). The filing was based on data from a phase III MAIA study. The stock has a Zacks Rank #2 (Buy). You can see the complete list of today’s Zacks #1 Rank (Strong Buy) stocks here.

McDonald's Corporation (MCD - Free Report) has entered into an acquisition agreement with Dynamic Yield Ltd. By acquiring this leader in personalization and decision logic technology, McDonald’s plans on improving technological offerings and customer experience. On completion of the acquisition, McDonald’s will be the sole owner of Dynamic Yield and will continue to invest in its core personalization product team.

After testing this technology in several U.S. restaurants, this Zacks Rank #3 company plans on expanding this facility in other national and international restaurants in 2019. The company will also begin to integrate this technology into its broader digital customer experience as well as at self-order kiosks and Global Mobile App. (Read: McDonald's Buys Dynamic Yield, Boosts Technology Offerings)

Valued at $4 billion, the contract is expected to be completed by April 2024. Per the terms of the deal, the aerospace giant will conduct full-rate production and delivery of 78 F/A-18 aircraft, specifically 61 F/A-18E and 17 F/A-18F aircraft, for fiscal years 2018 through 2021. The majority of the work will be executed in El Segundo, CA. (Read: Boeing Wins $4B Deal for Delivery of F/A-18 Jets to U.S. Navy)

NIKE reported third-quarter fiscal 2019 earnings per share of 68 cents which were flat with the prior-year quarter but surpassed the Zacks Consensus Estimate of 63 cents. This marked the 27th straight earnings beat. NIKE has a Zacks Rank #3.

Revenues of the Swoosh brand owner increased 7% to $9,611 million and surpassed the Zacks Consensus Estimate of $9,540.7 million. Additionally, continued strength in NIKE Digital, which delivered 36% constant-currency growth, provided a boost to the top line.

The table given below shows the price movement of the 10 largest components of the Dow, which is a price-weighted index, over the past five days and during the last six months. Over the past five trading days, the Dow has gained 0.8%. 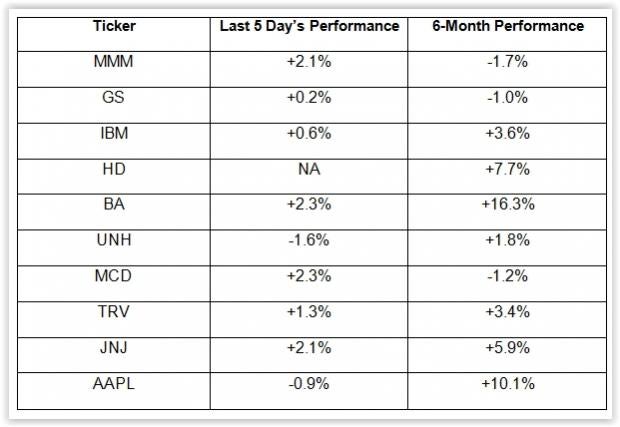 The inverted yield curve dominated market proceedings this week, since it usually heralds a near-term economic slowdown. Fresh economic data, including the crucial fourth-quarter GDP report, also seems to support such a conclusion. What is quite clear is that the bourses will witness heightened volatility in the weeks ahead.

All eyes are now on the next round of U.S.-China trade negotiations in Beijing. If markets witness even a glimpse of substantial progress, stocks could ignore near-term concerns and rally higher in the days ahead.

Here's Why You Should Hold on to Nordson's (NDSN) Stock Now