One of the main reasons for a terrific turnaround of Wall Street from 2018’s mayhem is continued flow of positive news on the trade conflict between the United States and China. Trade-related issues were mainly behind the stock market rout in the fourth quarter of 2018. The year-long, trade tussle is finally likely to be heading for an amicable solution.

Wall Street witnessed extreme volatility throughout 2018 primarily owing to trade-related issues. Imposition of tariffs on steel and aluminum by President Trump created a ruckus in the global economy. Notably, the Trump administration has already imposed $250 billion tariffs on Chinese goods while China levied $110 billion of retaliatory tariffs on U.S. imports.

Since the beginning of 2019, both United States and China are negotiating earnestly to find out an amicable solution to the trade spat.

On Feb 24, President Donald Trump tweeted that the United States is planning to delay tariffs on additional Chinese goods as trade-related negotiations have made substantial progress. CNBC reported that China has also committed to import $1.2 trillion of U.S. exports by 2025.

On Mar 29, White House said that the trade-related negotiation between the United States and China made progress in Beijing. Treasury Secretary Steven Mnuchin and U.S. Trade Representative Robert Lighthizer met with China’s vice premier Liu He in a “candid and constructive discussions” last week.

Trump is likely to again meet Liu He for the second round of discussion on Apr 4. Financial Times reported that 90% of the trade-related disputes have already been settled. However, the last 10% remains the trickiest part and may require both countries to soften their previous stands. If this happens, a U.S.-China trade deal might materialized within this month.

The Trump administration is gravely concerned about China’s drive to unseat the United States as the primary developer and supplier in the fields of high-tech sophisticated products. The implementation of tariffs stems from the Trump administration’s concern that China is leaving the intellectual property of the American companies vulnerable to theft.

On Mar 27, Reuters reported that China has made unprecedented proposals on a range of issues including the protection of U.S. intellectual properties to resolve the trade disputes. On Apr 4, White House economic advisor Larry Kudlow claimed that China has acknowledged for the first time that the United States has legitimate and genuine concerns about IP theft, forced technology transfer and cyber hacking by Chinese companies. Notably, the last 10% of the unresolved trade deal will revolve around these issues.

The major gainers of a possible trade deal will be those companies that have a strong international exposure especially in China. We have narrowed our search to five such stocks which have moved higher in the first quarter and still have upside if a trade deal materializes. All five stocks currently carry a Zacks Rank #2 (Buy). You can see the complete list of today’s Zacks #1 Rank (Strong Buy) stocks here. 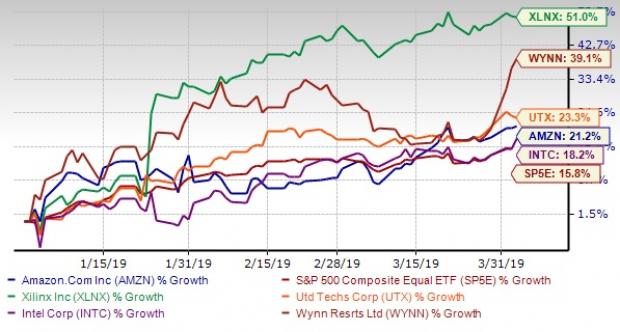 Wynn Resorts Ltd. WYNN is a leading owner and operator of destination casino resorts. Wynn Resorts’ major businesses are located in Macau. The government of China is considering measures to support Macau’s economy and introduce favorable policies, which are expected to improve visitation pattern and boost tourism and traffic in the region.

A massive 77% of Wynn Resorts’ revenues come from Macau. The stock has surged 39.1% year to date. The Zacks Consensus Estimate has increased 2% for both the current quarter and current year over the last 60 days.

United Technologies Corp. UTX provides technology products and services to building systems and aerospace industries worldwide. United Technologies intends to become more competent on the back of meaningful business acquisitions. In this context, the acquisition of Rockwell Collins is worth mentioning. The buyout is not only expected to fortify the company's existing product portfolio but also help in launching innovative solutions for aerospace customers going forward.

The acquisition of Rockwell Collins is likely to boost United Technologies’ sales in China in 2019 as a major supplier of engines and other plane parts to large aircraft manufacturers. The stock has surged 23.3% year to date. The Zacks Consensus Estimate for the current quarter and current year has improved 0.6% and 0.5%, respectively, over the last 60 days.

Intel Corp. INTC is one of the world's largest semiconductor makers in the fields of computing, networking, data storage and communication solutions worldwide. Intel’s non-volatile memory (NVM) business is poised to take off. While NVM has a fairly broad application across markets, the company is primarily targeting enterprise/data center customers to drive penetration of this high-margin segment.

Approximately 24% of Intel’s revenues come from China. The stock has surged 18.2% year to date. The Zacks Consensus Estimate for the current quarter and current year improved 0.5% and 0.2%, respectively, over the last 60 days.

Xilinx Inc. XLNX designs and develops programmable devices and associated technologies worldwide. Xilinx’s ongoing transition from a FPGA provider to an all-programmable devices producer has been helping the company gain market share. Its expanding product portfolio, which includes the Zynq RFSoC platform, is assisting it to counter intense competition from competitors.

Approximately 44% of Xilinx’s revenues come from Asia-pacific region especially from China. It has strong business partnership with big Chinese corporates like Baidu, Alibaba and Huawei Technologies. The stock has surged 51% year to date. The Zacks Consensus Estimate for the current quarter and current year improved 0.5% and 0.3%, respectively, over the last 60 days.

Amazon.com Inc. (AMZN - Free Report) engages in the retail sale of consumer products and subscriptions in North America and internationally. Amazon keeps its retail business very hard to beat on price, choice, and convenience with the help of a solid loyalty system in Prime and its FBA strategy. The company continues to push advantages exclusively to Prime members, thus encouraging them to spend more on Amazon.

Although the company has relatively small presence in China, the company has formed a partnership with NetEase Kaola to expand its foothold in cross-broader Chinese export and import business. The stock has surged 21.2% year to date. The Zacks Consensus Estimate for the current quarter and current year has improved 2.4% and 2%, respectively, over the last 60 days.

Is it Wise to Hold Prologis (PLD) Stock in Your Portfolio?