5 Best Stocks to Buy Ahead of Q1 Earnings Season

For the first time in more than a decade, Wall Street is bracing for a decline in quarterly profits despite higher revenues. From trade war issues to rise in labor costs, all are taking a toll on corporate profits. But amid the headwinds, companies from the retail, medical, aerospace, finance, utilities and business services spaces are expected to report promising year-over-year earnings growth. For the next few weeks, let us keep a close watch on stocks from these sectors that are likely to make the most of the first-quarter earnings season.

Bigwigs like Wells Fargo & Company (WFC - Free Report) and JPMorgan Chase & Co. (JPM - Free Report) will be kicking off the earnings season on Apr 12. Overall S&P 500 results are rather expected to be rather depressing in comparison to last year, when tax cuts helped boost profit margins by more than 20%.

Total earnings for the S&P 500 companies are anticipated to drop 4% from the same period last year, which will mark the first quarterly decline since 2016. Revenues, in the meanwhile, are expected to rise 4.6%. The last time revenues improved and profits fell was during the third quarter of 2008 or at times of a financial crisis. Lest we forget, such a dismal performance will follow 14.4% earnings growth on 6.7% revenue improvement recorded last quarter.

But, some may say that the recent progress in talks between the United States and Chinese trade negotiators is encouraging. However, it’s not enough to boost corporate profits as of now. IBES data from Refinitiv showed that analysts expect profit margins to shrink by 1.1 percentage point in the first quarter on a year-over-year basis because of tariffs. And how can we forget that the cost of aluminum, in particular, has gone up as the United States slapped tariffs on imports from China.

Increase in labor costs from a steady rise in wages is also a concern for corporates. The average workers’ pay check rose 4 cents to $27.70 an hour in March. The increase in pay may have slowed down to 3.2% from 3.4% in the past 12 months but wages continue to increase at the fastest pace in almost a decade. 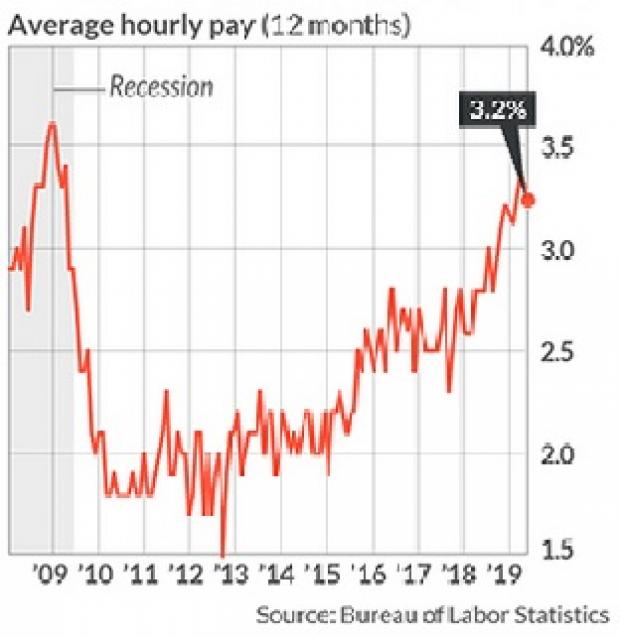 The recent rally in dollar, by the way, is likely to have a negative impact on U.S. multinational companies. After all, their foreign currency earnings tend to be affected by a stronger dollar. The dollar jumped 6.2% on a trade-weighted basis in the first quarter, its best year-over-year increase since the fourth quarter of 2015. Binky Chadha, chief U.S. equity and global strategist and head of asset allocation at Deutsche Bank in New York, warned that dollar gains could result in a 2.4 percentage point drag on first-quarter earnings.

Warning signs are flashing for the technology sector, especially for semiconductors due to their significant revenue exposure to China. Thus, chip stocks are mostly seen as sensitive to the trade war. Morgan Stanley’s equity strategist Michael Wilson added that the broader technology sector had seen the biggest percentage of companies missing earnings estimates in the fourth quarter of 2018 and the same is expected this earnings season. First-quarter earnings for the S&P 500 technology companies are expected to decline 10% year over year.

The second largest year-over-year earnings decline is expected to come from the materials sector, at -19.5%. In fact, the metals and mining segment is poised to see a worst decline. But, it’s the auto sector that is expected to decline the maximum on a year-over-year basis, at 22.9%. Auto sales for the first quarter came in softer than expected and that could be a big drag on earnings.

On the Brighter Side

The aerospace sector is poised to report the highest earnings growth among all sectors, which is estimated at 4.2% from the same period last year on 8.6% higher revenues. The business services sector has recently been looking up, with first-quarter earnings expected to rise 3.4% on 4.4% higher revenues.

Utilities and medical are likely to share the third-highest year-over-year profit growth, with first-quarter earnings poised to rise 2.7% from the same period last year on 2.3% and 5.9% higher revenues, respectively.

Earnings for the retail sector are set to grow 2.6% from the same period last year on 7.3% higher revenues, while banks, insurers and asset managers are expected to report sturdy growth. 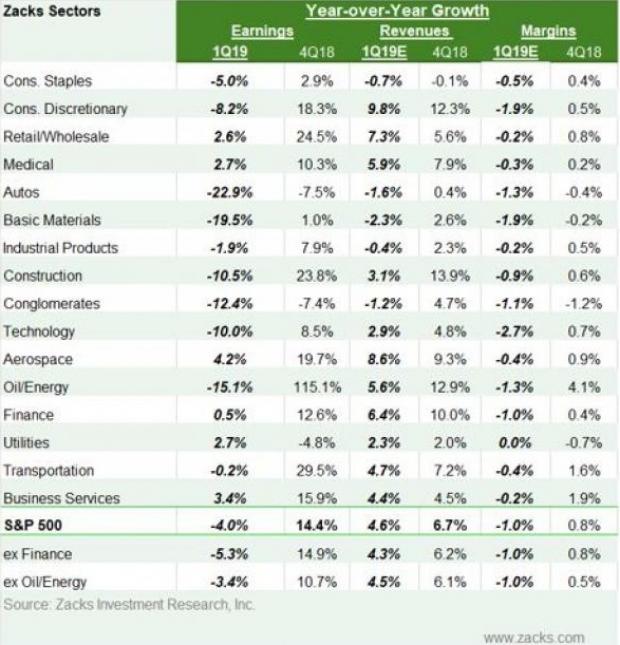 It will be prudent to invest in companies from the aforesaid winning sectors, which are expected to report an uptick in first-quarter earnings.

These stocks have a positive Earnings ESP. This is our proprietary methodology for determining stocks that have the best chance to surprise with their next earnings announcement. It provides the percentage difference between the Most Accurate Estimate and the Zacks Consensus Estimate. You can uncover the best stocks to buy or sell before they are reported with our Earnings ESP Filter. These stocks, in the meanwhile, also flaunt a Zacks Rank #1 (Strong Buy) or 2 (Buy).

CMS Energy Corporation (CMS - Free Report) operates as an energy company, primarily in Michigan. The stock has a Zacks Rank #2. The Zacks Consensus Estimate for its current-year earnings increased 0.4% over the past 60 days. The company is expected to report earnings results for the quarter ending March on Apr 25. CMS Energy has an Earnings ESP of +10.73%.

Alpine Immune Sciences, Inc. (ALPN - Free Report) focuses on the discovery and development of protein-based immunotherapies for the treatment of cancer, inflammatory disorders, and other diseases. The stock has a Zacks Rank #2. The Zacks Consensus Estimate for its current-year earnings moved up more than 100% over the past 60 days. The company is expected to report earnings results for the quarter ending March on May 13. Alpine Immune Sciences has an Earnings ESP of +9.68%.

Kohl’s Corporation (KSS - Free Report) operates as an omni-channel retailer in the United States. The stock has a Zacks Rank #1. The Zacks Consensus Estimate for its current-year earnings rose 5.1% over the past 60 days. The company is likely to report earnings results for the quarter ending April on May 28. Kohl’s has an Earnings ESP of +3.29%. You can see the complete list of today’s Zacks #1 Rank stocks here.

Franklin Resources, Inc. (BEN - Free Report) is a publicly owned asset management holding company. The stock has a Zacks Rank #1. The Zacks Consensus Estimate for its current-year earnings increased 2.6% over the past 60 days. The company is expected to report earnings results for the quarter ending March on Apr 26. Franklin Resources has an Earnings ESP of +1.95%.

Dominion Energy, Inc. (D - Free Report) produces and transports energy. The stock has a Zacks Rank #2. The Zacks Consensus Estimate for its current-year earnings climbed 0.2% over the past 60 days. The company is likely to report earnings results for the quarter ending March on May 3. Dominion Energy has an Earnings ESP of +10.66%.