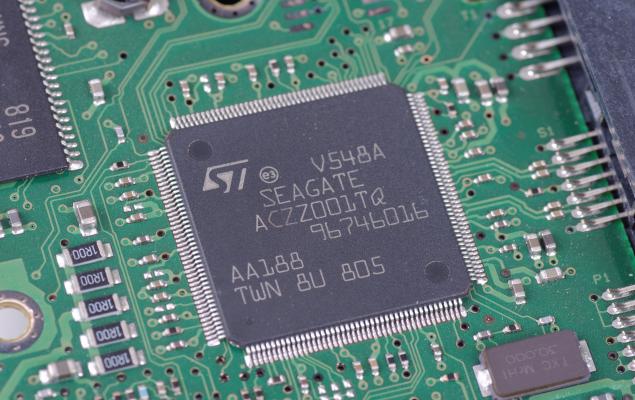 However, the figure decreased 43.2% from the year-ago period and 41.1% sequentially.

Revenues of $2.313 billion slightly outpaced the Zacks Consensus Estimate of $2.311 billion. However, the figure declined 17.5% from the year-ago quarter and 14.8% sequentially.

Following the robust earnings outperformance and management’s optimism regarding demand recovery in second half of calendar 2019, the stock surged 7.5% yesterday.

Notably, shares of Seagate have shed 10.9% in the past year, against the industry’s decline of 16.3%.

During the reported quarter, Seagate shipped 76.7 exabytes of hard disk drive (HDD) storage, with an average capacity of record 2.4 terabytes per drive. This marked year-over-year and sequential decline of 12.2%, each, in the total HDD exabytes shipments.

The company shipped 32.9 exabytes for the enterprise HDD market (including nearline and mission critical). This marked a sequential decline of 9.6% in exabytes shipments in the domain. However, capacity improved sequentially from 4.5 terabytes to 4.9 terabytes.

Particularly, in the nearline market, the company shipped 30 exabytes of HDD, down 9.1% sequentially. However, average capacity per drive of 7.2 terabytes improved 11% on a quarter-over-quarter basis. Management noted that the company’s 12-terabyte helium nearline product was one of the top revenue generators in the third quarter.

Notably, the company has commenced shipping of its highest capacity 16-terabyte products in the reported quarter. The company anticipates the offering to be a notable revenue driver going ahead, as production ramps to higher volumes in later 2019.

The company shipped 29.2 exabytes for the edge non-compute HDD market, with an average capacity of 2.4 terabytes. This marked a sequential decline of 10.4% in exabytes shipments.

Total HDD revenues declined 17.9% year over year to $2.124 billion in the reported quarter.

Non-HDD segment (enterprise data solutions, cloud systems and SSDs) revenues were down 12.9% year over year to $189 million, primarily due to lower SSD sales.

Non-GAAP gross margin came in at 26.6% contracting 420 bps on a year-over-year basis. The decrease can be attributed to decline in the overall sales of nearline volumes.

Non-GAAP operating expenses were down 9.4% on a year-over-year basis to $349 million. This decrease in expenses can be attributed to certain cost improvement initiatives, operational efficiency and reduced discretionary spending.

Income from operations during the reported quarter came in at $236 million, down 46.5% from the year-ago quarter. Operating margin came in at 10.2%, compared with year-ago figure of 15.7%.

Seagate ended the third quarter with a long-term debt (including current portion) of $4.52 billion compared with $4.32 billion reported in the previous quarter.

Cash flow from operations was $438 million, compared with $875 million reported in the previous quarter.

Free cash flow for the quarter amounted to $291 million, compared with $161 million reported during the second quarter.

In the third quarter, the company returned $505 million to shareholders, which includes dividends worth $178 million and repurchase of 7.2 million shares worth $327 million.

Notably, Seagate’s board of directors approved a cash dividend of 63 cents per share payable Jul 3, 2019.

Q4 Guidance in Line With Consensus

Management anticipates fourth-quarter fiscal 2019 revenues to be 2.32 billion (+/- 5%). The Zacks Consensus Estimate for revenues is pegged at $2.32 billion.

Seagate projects gross margins to be approximately 26.5%. Non-GAAP EPS for the third quarter is expected to be 83 cents (+/- 5%). The Zacks Consensus Estimate for earnings is pegged at 83 cents.

In fiscal 2020, management expects exabyte TAM to witness a CAGR above the long-term range of 35-40% for nearline drives.

Long-term earnings growth rate for Cadence Design, Avid Technology and Synopsys is pegged at 12%, 10% and 10%, respectively.