The stock was down nearly 2.3% during the pre-market trading session on May 6. Moreover, sluggish sales in Prepared Foods and Pork segments affected the quarter’s outcome.

Adjusted earnings for the reported quarter were $1.20 per share that surpassed the Zacks Consensus Estimate of $1.12. The bottom line declined 6% year over year.

Net sales improved nearly 6.9% to $10.44 billion and surpassed the Zacks Consensus Estimate of $10.23 billion. Sales volume increased 11.6% during the quarter while average sales price went down 4.8%.

Other: Sales in the segment were $277 million, depicting significant growth from $82 million reported in the prior-year quarter. Sales volume and average selling price improved remarkably.

Tyson Foods exited the quarter with cash and cash equivalents of $360 million, long-term debt of $10,810 million, and shareholders’ equity of $13,558 million.

Tyson Foods expects demand for protein to rise consistently and is well positioned to exploit all opportunities in the space. For fiscal 2019, USDA expects overall domestic protein production (chicken, beef, pork and turkey) to rise roughly 2% year over year. A portion of this rise is likely to be absorbed by export markets.

The company expects sales in fiscal 2019 to increase nearly $43 billion year over year. This upside can be attributed to higher volume and mix coupled with impacts of the Keystone acquisition. Further, the company continues to anticipate adjusted earnings per share (EPS) of $5.75-$6.10 in fiscal 2019. 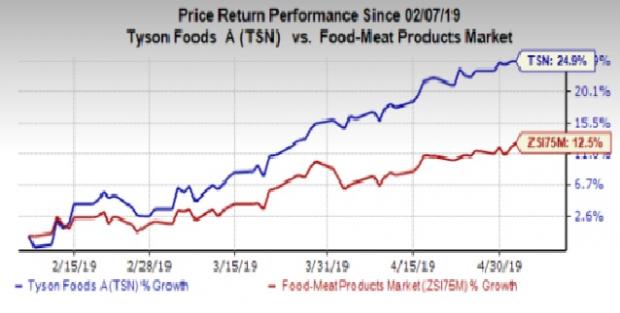 Shares of this Zacks Rank #3 (Hold) company have gained 24.9% in the past three months compared with the industry’s growth of 12.5%.

General Mills (GIS - Free Report) , with a Zacks Rank #2 at present, has long-term earnings per share growth rate of 7.5%.