Varian Medical Systems, Inc. recently announced the completion of the cyclotron installation for the Varian ProBeam Compact single-room proton therapy system at Biopolis, an international biomedical research hub in Singapore. Notably, this is in partnership with Proton Therapy Pte., Ltd.

Earlier this year, this Zacks Rank #3 (Hold) company had announced the installation of the gantry for the Varian ProBeam Compact single-room proton therapy system at the new oncology center in Biopolis. (Read More: Varian Medical's ProBeam Compact Picked by Biopolis)

It is encouraging to note that in the recently reported second quarter of fiscal 2019, revenues from the company’s Protons solutions business totaled $33 million, up 2% year over year.

Varian Medical has a significant presence in Asia. Notably, the company delivered strong double-digit growth in the fiscal second quarter in China, Japan and Southeast Asia, China being the second-largest market for expansion. APAC revenues grew 7% year over year.

In March, Varian Medical signed a three-year agreement with Tata Trust with a view to increase patient access to advanced radiation therapy treatments in India.

Technavio analysts expect the global proton therapy market to see a CAGR of more than 9% between 2018 and 2022. Advantages of proton therapy over standard radiation therapies currently fuel demand for proton therapy around the world.

Hence, the developments have been well-timed for Varian Medical. 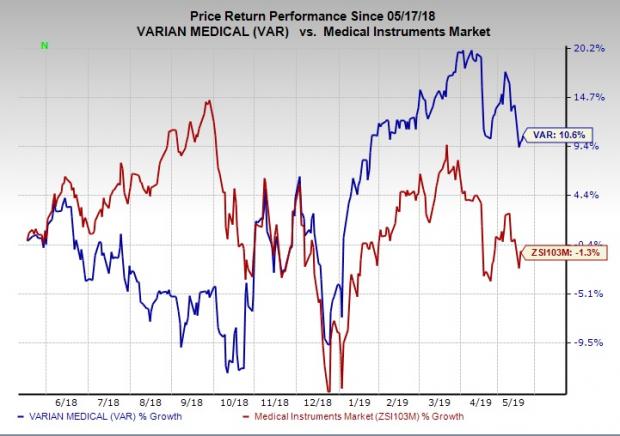 Over the past year, shares of Varian Medical have rallied 10.6% against the industry’s 1.3% decline. The current level is also higher than the S&P 500 index’s 4.2% rally.