Here's Why You Should Buy Masimo (MASI) Stock Right Now

Masimo Corporation (MASI - Free Report) has been gaining investor confidence on continued positive results. Over the past year, the stock has rallied 41.9% against the industry’s 3.3% decline. Also, the company has outperformed the S&P 500’s 3.6% rise.

The company has an encouraging earnings surprise history, having outpaced the Zacks Consensus Estimate in each of the trailing four quarters, the average being 6.6%. Notably, the consecutive beats underline its operating efficiency. A solid view for 2019 and a slew of developments are currently working in favor of the stock. 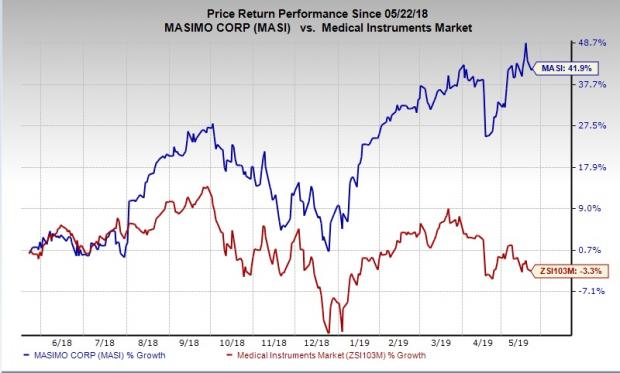 With solid prospects, this Zacks Rank #2 (Buy) stock is an attractive investment pick for now.

For 2019, Masimo expects total revenues of $919 million on a reported basis and $918 million on an adjusted basis, calling for year-over-year growth of 10.6% at cc. The projected figure is above the previously communicated $912 million.

The company recently received 510(k) clearance from the FDA for Radius PPG, which is expected to be a significant breakthrough in patient monitoring. (Read More: Masimo Gets FDA Nod for Radius PPG, Boosts Patient Monitoring)

What Do Estimates Say?

The Zacks Consensus Estimate for second-quarter earnings per share is pegged at 73 cents. The same for revenues stands at $223 million, indicating a year-over-year rise of 5.4%.

DENTSPLY’s long-term earnings growth rate is expected to be 11.5%.