In a significant development, the U.S. House of Representatives voted in favor of several amendments to protect cannabis users in legal states. These amendments will prohibit federal agencies, especially the Department of Justice, from interfering with cannabis programs, individuals and businesses in legal states.

The amendments won approval from the U.S. House Rules Committee and are heading for a voting on the House floor later this week. The measure would need approval in Senate after getting full House vote. The committee also instructed the FDA to regulate CBD products as conventional foods and dietary supplements.

The marijuana industry has strong potential especially after its legalization for recreational and medicinal use. Moreover, the industry is enjoying benefits of expansion into other industries like food, beverage, tobacco and cosmetics.

On May 31, the FDA held its first hearing to take a decision on whether companies can add CBD, a non-intoxicating cannabis compound, to food, beverages and dietary supplements. Several CBD manufacturers, researchers, farmers and retailers have urged the regulatory authority to allow the use of cannabis. In this regard, the FDA’s approval of CBD-based drug Epidiolex was a major achievement for the industry.

On Mar 28, the House Financial Services Committee voted 45-15 in favor of passing the Secure and Fair Enforcement Banking Act of 2019 or the SAFE Banking Act. The bill seeks to safeguard the process of financial lending to cannabis companies in the United States.

This bill would not only protect the industry’s credit lines, but also aid cannabis ancillary industries in the country. The ancillary sector has been suffering from financial uncertainties associated with the legal status of marijuana in the past.

Cannabis is getting approval from many U.S. states for recreational uses, in addition to medical usage. Though pot remains entirely illegal at the federal level, currently 47 U.S. states offer some form of legalized marijuana for sale.

According to Arcview Market Research’s annual report --- "The State of Legal Cannabis Markets" --- the global cannabis market size is likely to reach $15 billion this year, implying a gain of 36% year over year. The report evaluates "total cannabinoid market," including sales of medical and recreational cannabis at dispensaries, hemp-derived products in CBD (non-psychoactive cannabidiol) and the U.S. FDA approved CBD-based pharmaceuticals.

As per MGO|ELLO Alliance, investment in U.S cannabis industry reached $1.3 billion in the first half of 2019. Per Arcview Market Research and BDS Analytics, cannabis sales in dispensaries, retail stores and pharmacies are likely to grow nearly $45 billion globally by 2024. Of this, CBD products are likely to command $20 billion is sales in 2024.

Research firm Cowen projected that the market size of the U.S. legal cannabis industry will reach $75 billion in by 2030. According to Barclays, the U.S. cannabis market would be $28 billion if legalized in 2019, and grow to $41 billion by 2028.

The marijuana industry is considered extremely volatile. Most of these companies are in their early stages of development and characterized as risky for investors. However, cannabis stocks are solid long-term bets. Of these, stocks with a Zacks Rank #3 (Hold) or better and having solid long-term growth potential are worth trying out despite the latent risks. We have narrowed down our search to five such stocks. 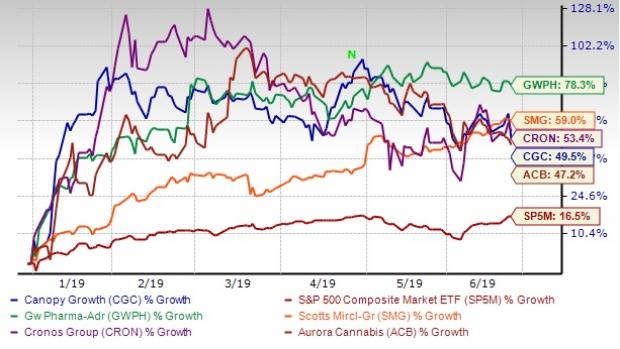 The company has an expected earnings growth rate of 16% and 16.7% for the current quarter and current year, respectively. The Zacks Consensus Estimate for the current year has improved 2.4% over the last 60 days. The stock has surged 59% year to date.

Cronos Group Inc. CRON engages in investment in firms that are licensed to produce and sell medical marijuana pursuant to Canada's Marihuana for Medical Purposes Regulations. The stock carries a Zacks Rank #3. The company has an expected earnings growth rate of 137.5% for the current year. The Zacks Consensus Estimate for the current year has improved 200% over the last 60 days. The stock has surged 53.4% year to date.

Aurora Cannabis Inc. ACB produces and distributes medical cannabis products. It is vertically integrated and horizontally diversified across various segments of the cannabis value chain. The stock carries a Zacks Rank #3. The company has an expected earnings growth rate of 85% for the next year. The Zacks Consensus Estimate for the next year has improved 50% over the last 60 days. The stock has surged 47.2% year to date.