After fears of global economic slowdown and higher supply -- especially from the United States -- subdued crude oil prices for a month and a half, a turnaround showed up last week on heightened geopolitical conflict with Iran.

Disturbances in Iran intensified on Jun 13, when two oil tankers were set on fire in the Strait of Hormuz, for which the United States blamed Tehran. On Jun 20, Iran’s Revolutionary Guard claimed that it recently shot down a U.S. drone near the Strait of Hormuz. Iran alleged that the drone had entered its sky, which the U.S. military claimed as international airspace.

On Jun 21, President Donald Trump tweeted “Iran made a very big mistake!” although the United States refrained from conducting military strike on Iran, Trump said that the United States would impose “major additional sanctions” against Iran on Jun 24. Notably, Iran is already facing U.S. sanctions regarding crude oil exports after the Trump administration withdrew from Iran Nuclear Agreement of 2015.

The intensifying friction between the two countries could disrupt the shipment of crude through the Strait of Hormuz, responsible for the passage of 20% of total crude oil being consumed globally, per media reports. Through the strait, the majority of the crude volumes of countries like Kuwait, UAE, Iraq and Saudi Arabia are exported.

It goes without saying that while the Saudis and the United States are on one side, the Houthi Yemenis and Iran make the other. Iran has reportedly warned that if its economy is hit due to America’s sanction on its crude export, it will then attempt to disrupt the passage of oil tankers through the strait. This could further constrain global oil supply. The news in fact has already bumped up oil prices.  (Read More: Trump Warns Iran for Drone Attack: Oil Stocks in Spotlight)

On Mar 11, the IEA projected that global crude oil demand will remain firm at least up to 2024 although the rate of demand growth will decline. By this time, demand for oil will rise by 7.1 million bpd.

Despite a surge in sales of electric cars and massive oil exploration in the United States, demand for oil is expected to rise in the petrochemical industry, especially in the plastic industry. Also, growing demand for aviation oil will support crude oil prices.

Moreover, geopolitical conflicts in major oil-exporting countries like Iran, Venezuela and Libya will push crude oil prices to a great extent. Several industry watchers have estimated that more sanction on oil supply from Iran may witness crude oil price to touch even $100 per barrel.

Crude oil prices are likely to remain northbound in the near term. Consequently, investment in oil exploration and production stocks should be lucrative. We have narrowed down our search to five such firms with a Zacks Rank # 1 (Strong Buy) or 2 (Buy). You can see the complete list of today’s Zacks #1 Rank stocks here.

The chart below shows price performance of our five picks in the last three months. 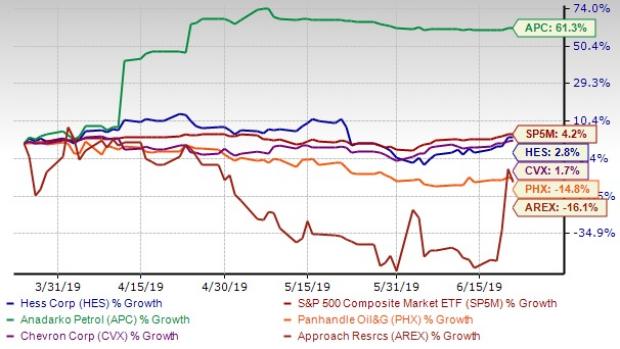 Anadarko Petroleum Corp. APC engages in the exploration, development, production, and marketing of oil and gas properties. It operates through three segments: Exploration and Production, WES Midstream, and Other Midstream. It sports a Zacks Rank #1. The company has an expected earnings growth rate of 19.5% for the current year. The Zacks Consensus Estimate for the current year has improved 14.4% over the past 60 days.

Hess Corp. HES explores, develops, produces, purchases, transports, and sells crude oil, natural gas liquid and natural gas. It operates through two segments, Exploration and Production, and Midstream. It carries a Zacks Rank #2. The company has an expected earnings growth rate of 120.3% for the current year. The Zacks Consensus Estimate for the current year has improved 215.4% over the past 60 days.

Chevron Corp. (CVX - Free Report) engages in integrated energy, chemicals, and petroleum operations worldwide. It operates in two segments, Upstream and Downstream. It holds a Zacks Rank #2. The company has an expected earnings growth rate of 23% for the next year. The Zacks Consensus Estimate for the current year has improved 1.4% over the past 60 days.

Approach Resources Inc. AREX is an independent energy company, focusing on the acquisition, exploration, development, and production of unconventional oil and gas reserves. It holds a Zacks Rank #2. The company has an expected earnings growth rate of 50% for the current year. The Zacks Consensus Estimate for the current year has improved 33.3% over the past 60 days.

Amazon to Open 4-star in Dallas to Bolster Retail Presence