Federal Signal Corporation (FSS - Free Report) has impressed investors with its recent earnings streak. It surpassed estimates all through in the four trailing quarters, the positive average earnings surprise being 21.75%.

Over the past three months, the company has gained 5.1%, outperforming the industry’s growth of 3.7%. Its share price increase exhibits investor optimism over the stock. 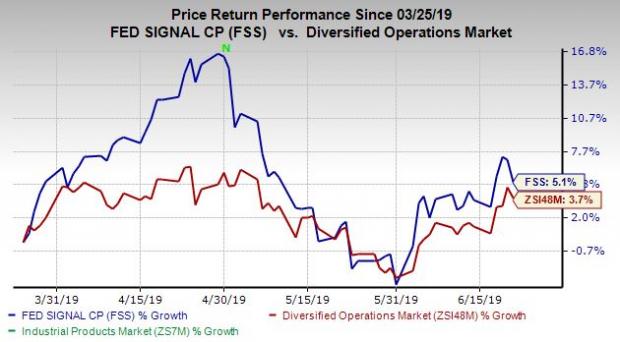 The stock currently carries a Zacks Rank #2 (Buy).We believe that its notable traction across markets will drive growth in the upcoming quarters.

Federal Signal is well poised to gain from a diversified business structure, strong customer base and solid product portfolio that range from street sweepers to toll booth technology for government, industrial and commercial customers. The company’s investments in its service center in Leeds, AL will benefit its Guzzler product lines. Also, in first-quarter 2019, the company kicked off a new product development project, which will boost its safe digging products portfolios.

Moreover, acquisitions have been Federal Signal's preferred mode of business expansion. In this regard, the buyout of Truck Bodies and Equipment International (“TBEI”) (completed in June 2017) is worth mentioning. TBEI has enabled the company to diversify its product offerings in maintenance and infrastructure markets. Notably, in 2018, the TBEI buyout along with Federal Signal's organic growth initiatives has enabled its net sales to exceed $1 billion for the first time in over a decade. As a matter of fact, for 2019, the company expects revenues to grow year over year for the TBEI business.

Over the past several quarters, Federal Signal has consistently returned significant cash to shareholders through dividends and share repurchases. Notably, in the first quarter of 2019, the company repurchased common stock worth $1 million under its share repurchase program. Further, it paid dividends worth $4.8 million during the quarter.

In addition, the company’s earnings estimates have been trending north over the past couple of months, with three upward estimate revisions for 2019. Notably, the Zacks Consensus Estimate for 2019 earnings is pegged at $1.57, higher than $1.55 recorded couple of months ago.

Crane surpassed estimates in each of the trailing four quarters, the average positive earnings surprise being 6.74%.

ITT outpaced estimates in each of the preceding four quarters, the average earnings surprise being 7.02%.

Here's Why You Should Hold GNC Holdings (GNC) Stock for Now