L3 Technologies Inc. recently secured a contract to offer depot-level repair, and upgrade and overhaul services for the submarine photonics mast programs. Majority of the task will be executed in Northampton, MA.

Valued at $73 million, the contract was awarded by the Naval Undersea Warfare Center Division Newport, Rhode Island. Work related to the deal is scheduled to be over by June 2025.

What are Photonics Masts?

Photonic masts are sensors on submarines that function like a periscope without requiring a periscope tube, thus freeing design space during construction and limiting risks of water leakage in the event of damage. These opto-mechanical devices have evolved over time to incorporate improved optics, along with the introduction of electrical drives and line-of-sight stabilization.

The United States is strategically strengthening its naval power by upgrading its submarines due to the rising worldwide geo-political tensions. In this backdrop, the photonics mast market is experiencing increased demand owing to the changing global military scenario. Notably, these components are positively correlated with the dynamics of the submarine market.

With the current U.S. administration in favor of spending significantly on the nation’s naval defense, maritime sensor systems provider like L3 Technologies holds immense growth potential. The latest contract win is an instance of that. We believe the company’s Micreo acquisition in 2016 played a vital role in winning this deal. Micreo is a specialized provider of high-performance microwave, millimeter wave and photonic technology that complemented L3 Technologies’ wide range of sensor products.

Keeping in mind the latest growth trend of the global defense space, the market for global military submarine photonics mast and antenna is expected to witness a CAGR of 6% during the 2017-2021 period (as per Technavio). Considering this, we may expect L3 Technologies to win more such contracts from the Pentagon in the days ahead, which in turn, might boost the company’s profit margin substantially. 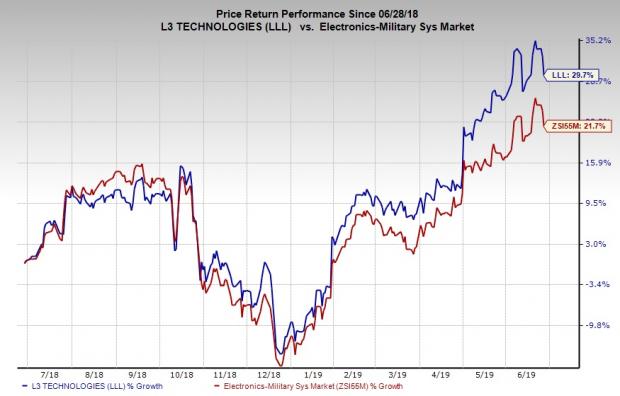 Wesco Aircraft’s long-term earnings growth rate is projected at 12%. The Zacks Consensus Estimate for 2019 earnings has moved 3.7% up to 84 cents over the past 60 days.

Northrop Grumman came up with average positive earnings surprise of 18.50% in the last four quarters. The Zacks Consensus Estimate for 2019 earnings has climbed 2.26% to $19.42 over the past 60 days.

Leidos Holdings delivered average positive earnings surprise of 6.81% in the last four quarters. The Zacks Consensus Estimate for 2019 earnings has risen 1.54% to $4.60 over the past 60 days.