Better Buy for Second Half of 2019: Microsoft (MSFT) vs. Amazon (AMZN) Stock

Microsoft MSFT was the Dow’s top first-half performer in 2019 to help it once again become the world’s most valuable public company with a market cap of over $1 trillion. Meanwhile, Amazon (AMZN - Free Report) stock easily topped the S&P 500, as the e-commerce giant continues to expand its reach.

The two diversified tech firms compete in one of the most talked about and valuable markets. With July upon us, let’s see which of these stocks, MSFT vs. AMZN, looks like the better buy for the second half of 2019.

Microsoft’s Office and Windows businesses continue to thrive and evolve and are arguably as important to enterprises and individuals as ever before. The Redmond, Washington-based firm has also expanded its reach through acquisitions from Linkedin to GitHub. Yet it is Microsoft’s cloud computing business, headlined by Azure, which has driven MSFT’s climb in recent years.

Microsoft’s Intelligent Cloud revenue jumped 22%, with Azure up 73%, during its third quarter of fiscal 2019. The company’s expansion into cloud computing has seen it compete directly with industry leader Amazon’s AWS and partner with the likes of Walmart WMT for cloud, artificial intelligence, and more. It is important to note that some firms have no interest in helping boost Amazon’s high-margin cloud business to help it expand its tentacles. More recently, MSFT detailed some of its cloud gaming plans, which seems to be the next frontier of the $135 billion global video game market, as Google GOOGL prepares to burst onto the scene this fall.

Amazon’s early adoption and fast cloud computing expansion gave the firm a huge leg up on its peers. And as we mentioned, it has helped AMZN become a profitable company. The company has also expanded deeper into the pharmaceutical industry and has the likes of FedEx FDX worried about its logistics business. But at its core, Amazon is still an e-commerce business. According to eMarketer, AMZN is set to capture 47% of total U.S. e-commerce sales in 2019—second place eBay EBAY is projected to account for 6.1%.

The company’s ability to attract users to its $119 per year Prime memberships will remain key. Amazon has also promised to reduce shipping times for customers as Target TGT, Walmart, and others increase their digital offerings. Meanwhile, its Prime Video business looks poised to play a major role in the quickly expanding streaming TV ecosystem. Amazon’s ability to offer access to TV shows, movies, and some live sports all in one place could help it stand out against Netflix NFLX and soon enough Disney DIS and others. And not to be forgotten, Amazon is now the third-largest digital advertiser in the U.S., behind only Google and Facebook FB. 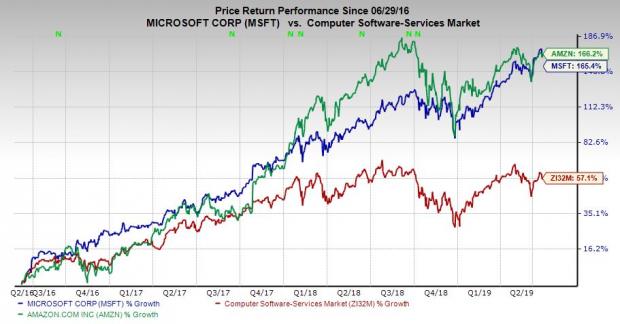 Microsoft’s adjusted Q4 earnings are projected to climb 7.1%, with fiscal 2019 expected to climb 18%. Peeking ahead, the company’s 2020 EPS figure is expected to pop over 11% higher than our current year-estimate.

On top of that, AMZN’s adjusted full-year 2019 earnings are projected to pop 32%. The company’s fiscal 2020 EPS figure is then expected to come in 44% above our current-year estimate.

Amazon has long been considered a growth stock, and it is still expected to post solid double-digit top-line gains. Yet, revenue expansion is projected to slow down significantly from where is has been in the recent past. This helps put AMZN and MSFT on more even footing in that department, with Amazon set to see its earnings jump much higher.

In terms of valuation, Amazon’s price/sales ratio marks a significant discount compared to MSFT, as it has for the last five years. Microsoft does trade at a far lower forward earnings multiple (26X vs. 59X) and pays a quarterly dividend, with a 1.4% yield at the moment—AMZN does not pay a dividend.

Microsoft and Amazon are Zacks Rank #3 (Hold) stocks at the moment that rest near their 52-week and all-time highs. With all this in mind, both stocks present investors exposure to the booming cloud market, along with many other growth sectors. Therefore, it seems like a toss up at the moment. A slight advantage could, however, be given to MSFT if we take into account possible government intervention of Amazon.