Nonfarm payroll data for June clearly indicates that the U.S. economy, which is in its historically longest 121st month of expansion, is nowhere near recession, even though there is a drop in pace. It was widely considered that the lingering trade dispute with China, slowdown in global economic growth, a drop in U.S. exports especially from the manufacturing sector, which is suffering from hike in input costs due to higher tariffs, have dented both business and consumer confidence.

However, June’s job data showed that there is a ray of hope in the U.S. economy. Despite strong job addition by professional and business services, health care, transportation and warehousing and construction, it was the manufacturing sector that surprised all. Notably, the manufacturing sector generates 12% of U.S. GDP. At this stage, the most important question is whether the Fed will cut rate in July as largely expected by investors.

Professional and business services, health care, transportation and warehousing and construction added 51,000, 35,000, 24,000 and 21,000 jobs, respectively. However, the surprising element was the manufacturing sector, which added 17,000 jobs, far ahead of an average 8,000 jobs in the first five months of 2019. This was in line with the recently released ISM manufacturing index for June in which employment index rose to 54.5 in June from 53.7 in May, indicating strong hiring by U.S. manufacturers.

IHS Markit reported that U.S. manufacturing PMI rose 50.6 in June from 50.1 in May even though trade negotiations between the United States and China broke down abruptly in early May. Notably, the IHS Markit data of China, Eurozone (especially Germany and France), the U.K., Japan and Russia fell to below 50 in June, implying contraction in manufacturing activities.

On Jun 14, the Federal Reserve reported that U.S. industrial production increased by 0.4% in May, the highest in six months. Most importantly, the manufacturing sector registered growth of 0.2%, marking its first monthly gain in 2019.

On Jun 26, the Department of Commerce reported that core durable goods order –- a key metric to track business investment plan –- jumped 0.4% in January after witnessing a sharp fall in the previous three months. Notably, business investment in the 12 months ended in May rose to 1.4% from 1.2% in April.

Will Fed Cut Rate in July?

According to CME Fedwatch, after the declaration of June’s labor market data, probability for a quarter percentage rate cut  by the Fed in July dropped to 94% from 100% earlier. Similarly, the probability for half a percentage rate cut in July declined to 6% from 25%. All three major stock indexes --- the Dow, S&P 500 and Nasdaq Composite --- shed 0.2%, 0.2% and 0.1%, respectively, on Jun 5.

Despite maintaining a dovish monetary stance and signaling monetary easing in 2019, Fed is yet to comment on when it will cut rate. On Jun 25, Jerome Powell said that the central bank will take a wait-and-see approach to monitor how fast economic conditions are changing in recent times. The central bank also reaffirmed its view that inflation will rise to 2% although it may take more time to reach there. Therefore, a rate cut in July cannot be taken for granted.

Under these circumstances, the Fed could delay rate cut still September citing strong labor market data, some positive signs in U.S. manufacturing and renewed negotiations related to the U.S.-China trade conflict, in which both sides have decided not to impose further tariffs on each other for the time being.

At this stage, it will be prudent to invest in manufacturing stocks with a favorable Zacks Rank. We have narrowed down our search to five such stocks, which surged in the last six months and still have upside left. All these five stocks sport a Zacks Rank #1 (Strong Buy). You can see the complete list of today’s Zacks #1 Rank stocks here.

The chart below shows price performance of our five picks in the past six months. 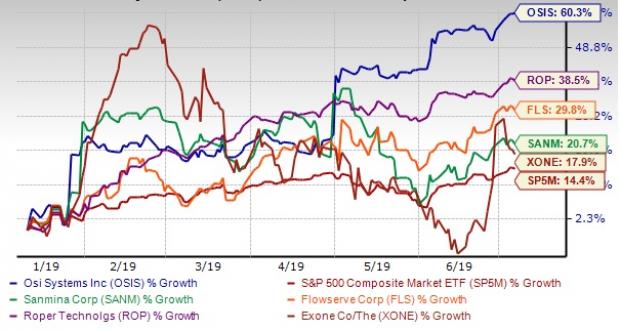 OSI Systems Inc. (OSIS - Free Report) is a leading designer and manufacturer of specialized electronic systems and components for critical applications in the homeland security, healthcare, and defense and aerospace industries. The company has an expected earnings growth rate of 16.9% for the current year. The stock price has surged 60.3% in the past six months.

Flowserve Corp. (FLS - Free Report) designs, develops, manufactures, distributes, and services industrial flow management equipment in the United States, Europe, the Middle East, Africa, Asia, and internationally. The company has expected earnings growth of 25.1% for the current year. The stock price has surged 29.8% in the past six months.

Sanmina Corp. (SANM - Free Report) provides integrated manufacturing solutions, components, products and repair, logistics, and after-market services worldwide. It operates in two segments, Integrated Manufacturing Solutions; and Components, Products and Services. The company has expected earnings growth of 25.1% for the current year. The stock price has surged 20.7% in the past six months.

Roper Technologies Inc. (ROP - Free Report) designs and develops software, and engineered products and solutions worldwide. The company operates in four segments: Application Software, Network Software & Systems, Measurement & Analytical Solutions and Process Technologies. The company has an expected earnings growth rate of 10% for the current year. The stock price has surged 38.5% in the past six months.

The ExOne Co. (XONE - Free Report) develops, manufactures, and markets three-dimensional (3D) printing machines, 3D printed and other products, materials, and services to industrial customers primarily in North America, Europe, and Asia. The company has expected earnings growth of 70.5% for the current year. The stock price has surged 17.9% in the past six months.