On Jul 9, the National Federation of Independent Business (NFIB) reported that the NFIB Small Business Optimism Index declined to 103.3 in June from 105 in May. Notably, May’s reading was the highest since October. However, the uncertainty index rose to its highest level since October 2017.

While optimism remains at historically high levels, the June figure reversed the gain posted in May, with six of the total 10 survey components lagging, three components improving and one remaining unchanged. Both capital spending plans and actual capital spending declined in June.

Why Small Business Is Important?

Small corporates create a significant amount of jobs in the U.S. economy. More than 50% of the newly created jobs in the private sector originate from this sector. These people constitute a large part of customers for big businesses.

Moreover, small companies are a major part of the supply chain management systems of large companies for innovative and technologically superior inputs. Additionally, small businesses often end up being an important part of corporate America's customer base.

Is Trump Administration a Big Boost for Small Enterprises?

A survey conducted by the Wilmington Trust clearly revealed that small business owners strongly favored President Donald Trump’s pro-business policies, especially the corporate tax cut and deregulations. The survey was conducted between May 24 and Jun 14.

Small Caps Are Important During Volatility

Small-cap stocks carry some special features which make them very useful in a volatile market. Small-cap stocks are mostly immune to any external shock since the United States is the primary market of their products. This is aiding this segment to outperform the broader market defying extreme volatility.

At this stage, it will be prudent to invest in small-cap stocks with a favorable Zacks Rank and strong growth potential. We have narrowed down our search to five stocks with a Zacks Rank #1 (Strong Buy). You can see the complete list of today’s Zacks #1 Rank stocks here. 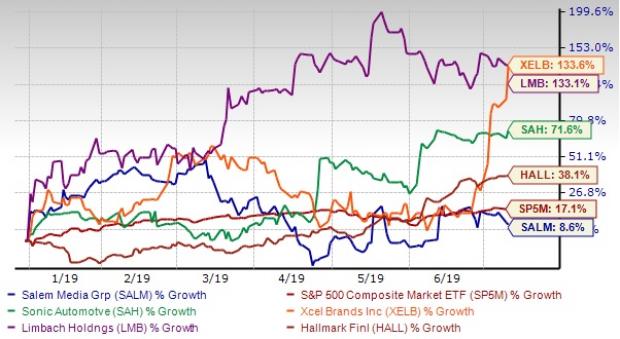 Limbach Holdings Inc. LMB provides commercial specialty contract services in the United States. It operates in two segments, Construction and Service. The company has an expected earnings growth rate of 305.8% for the current year. The Zacks Consensus Estimate for the current year has improved 35.4% over the last 60 days.

Salem Media Group Inc. SALM operates as a multimedia company in the United States. It operates through three segments: Broadcast, Digital Media, and Publishing. The company has an expected earnings growth rate of 216.7% for the current year. The Zacks Consensus Estimate for the current year has improved 55.6% over the last 60 days.

Hallmark Financial Services Inc. (HALL - Free Report) underwrites, markets, distributes, and services property/casualty insurance products to businesses and individuals in the United States. The company operates in the Specialty Commercial, Standard Commercial, and Personal segments. The company has an expected earnings growth rate of 33.7% for the current year. The Zacks Consensus Estimate for the current year has improved 3.8% over the last 60 days.

Sonic Automotive Inc. SAH operates as an automotive retailer in the United States. It operates in two segments, Franchised Dealerships and EchoPark. The company has an expected earnings growth rate of 18.1% for the current year. The Zacks Consensus Estimate for the current year has improved 3.5% over the last 60 days.

Xcel Brands Inc. XELB operates as a media and consumer products company in the United States. The company designs, produces, licenses, markets, and sells branded apparel, footwear, accessories, jewelry, home goods and other consumer products. The company has an expected earnings growth rate of 33.3% for the current year. The Zacks Consensus Estimate for the current year has improved 27.3% over the last 60 days.