In April 2019, Yamana announced the sale of the Chapada mine and closed the deal on Jul 5. It received an initial cash payment of $800 million along with $100 million, contingent on the development of a pyrite roaster by Lundin. It also includes a 2% net smelter return royalty on the Suruca gold project and the right to receive additional cash consideration of up to $125 million based on the gold prices over a period of 5 years from the date of deal closure. Notably, the Chapada mine produced 29,019 ounces of gold in the second quarter.

In the second quarter, Jacobina recorded its 11th consecutive quarter of more than 30,000 ounces of gold production. The mine is emerging as a leading operation for the company in terms of production, costs and safety. Moreover, the company also noted that other major mines including the Canadian Malartic, El Penon and Cerro Moro delivered strong performance during the second quarter.

However, production in the Minera Florida was affected by lower productivity during the second quarter as the company negotiated new collective bargaining deals with several unions. Notably, the company has reached on agreements with all unions.

During the quarter, Yamana also implemented corporate overhead reductions. It streamlined the organizational structure to reflect its current portfolio of assets. Per the company, these initiatives are likely to generate annualized savings worth $15 million, which will lower corporate overhead on a cash basis to $60 million per annum.

Shares of Yamana have lost 9.3% in the past year against the 24.9% rise of its industry. 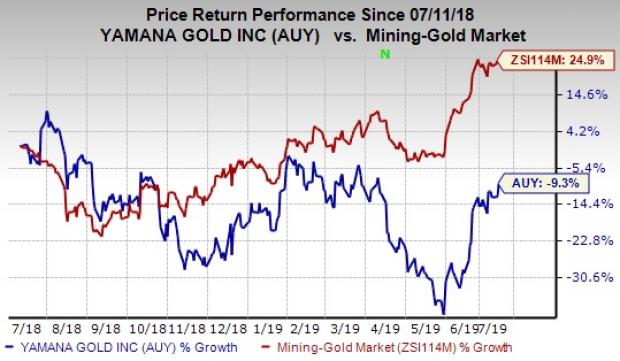 Flexible Solutions has projected earnings growth rate of 342.9% for the current year. The company’s shares have surged 171.1% in a year’s time.

Fortescue Metals has an estimated earnings growth rate of 294.2% for the current year. Its shares have rallied 87.9% in the past year.

Here's Why You Should Add DTE Energy (DTE) to Your Portfolio