Intel (INTC - Free Report) has reportedly found a buyer for its failed 5G smartphone modem business in none other than Apple (AAPL - Free Report) . Per Wall Street Journal, Apple is interested in acquiring Intel’s smartphone-modem chip business for approximately $1 billion.

Markedly, earlier WSJ had revealed that Intel is incurring loss of $1 billion annually on its modem operations. Consequently, this news comes as a breather for Intel’s investors.

Notably, Intel stock has returned 1.1% in the past year, against the industry’s decline of 6.8%. 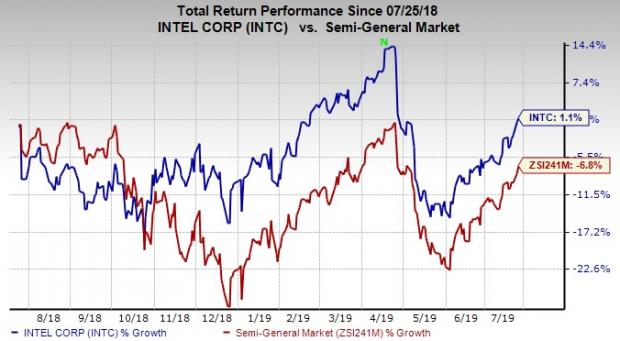 Around mid-April, this year, Intel’s CEO Bob Swan announced that the company intends to drop the 5G smartphone modem business after failing to realize “clear path to profitability and positive returns.

With an aim to minimize the losses from its unsuccessful 5G smartphone modem business, Intel was considering an auction of its approximately 8,500 patents, as revealed by IAM report in early July.

However, Intel halted the auction of its 8,500 5G modem patents. James Kovacs, an Intel executive, emailed the bidders about the decision. Kovacs said that despite “very strong market interest” in the portfolio, the bidding process was stopped because it was negotiating an agreement with a single, unnamed bidder.

Apple has reportedly been eyeing the assets for quite some time and it makes sense to consider the iPhone maker as the plausible single buyer of Intel’s smartphone modem business. Moreover, Apple has been hiring Intel’s 5G workforce, including Messay Amerga, Intel’s 5G chief and Umashankar Thyagarajan, a senior director and project engineer on the same team.

Notably, Apple inked a multi-year license and supply agreement with Qualcomm (QCOM - Free Report) , putting a check on “all ongoing litigations.” Although, Apple reportedly found a substitute for Intel’s 5G modem chips in Qualcomm, the rumour that it is willing to buy Intel’s discontinued business highlights the iPhone maker’s aggressive vertical integration policy.

Apple is known to keep its suppliers on toes with its self reliant strategy. This time around, dynamics seem to have changed, as Intel stands to benefit. Apple’s ample cash balance enables it to pursue any growth strategy, whether by way of acquisitions or otherwise.

The rumored developments on Apple-Intel deal didn’t go down well with Qualcomm’s investors. The stock was down 2.4% in the yesterday’s trading session.

What’s in Store for Intel?

Intel is well poised to gain from the deal if it leads to fruition. Meanwhile, the company’s focus on data center, cloud, self-driving car and IoT are key growth drivers. The company has made progress in this area and is now offering more integrated solutions that are likely to be competitive on a cost-per-watt basis.

Further, the company is evaluating prospects in 5G for IoT and data center, considering the huge complementarities of the technology in high growth domains.

Moreover, Intel is investing in field programmable gate array (FPGA) for acceleration, and memory to reduce latency and increase speeds. This is enabling the company to develop custom solutions for big players. The chipmaker has acquired Omnitek, which will boost FPGA capabilities. Intel also inked deal to acquire Barefoot Networks to gain programmable Ethernet switch-making capabilities in a bid to enhance data center customer base.