Given the strong start to second-quarter earnings, it won’t be a bad proposition to invest in chip stocks that are likely to come up with promising earnings results, eventually leading to an uptick in share price.

The PHLX Semiconductor Index SOX, which consists of 30 major companies that design, manufacture and distribute semiconductors, jumped 3.1% to 1,622.02 on Jul 24. The index closed at an all-time high, easily surpassing its previous record close at 1,589.02 set on Apr 24. What’s more, the index has now notched a run of six closing highs in a row.

Such a stellar performance has put the gauge up more than 40% so far this year, way more than the broader S&P 500 index’s gain of around 20%. 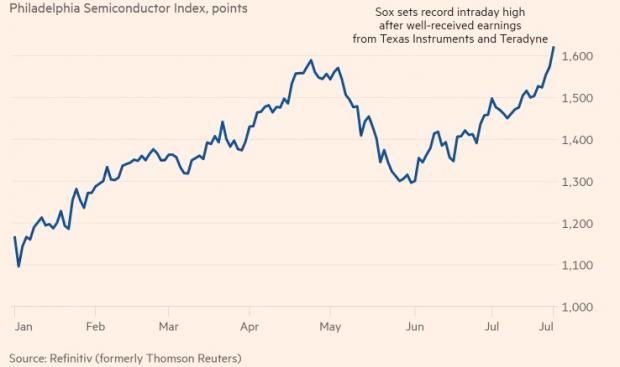 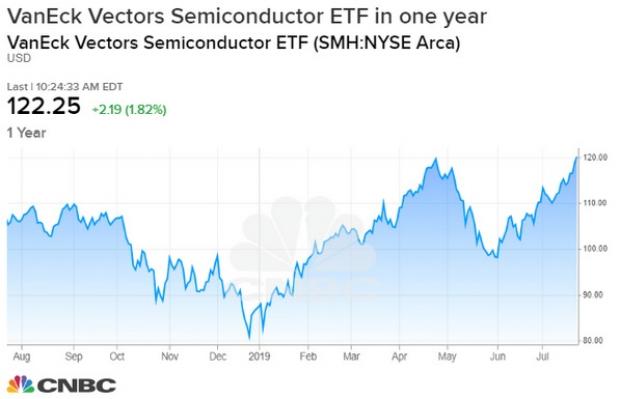 It’s worth pointing out that the indexes’ record run came despite lack of progress in U.S.-China trade talks. Both the countries have imposed tariffs on each others’ goods, affecting chip makers the most. But, not just trade issues, semiconductor stocks are facing a weaker pricing environment for memory chips and lesser-than-expected growth in applications such as PCs, servers and smartphones. This has compelled many agencies, including International Data Corp and IHS Markit, to lower chip sales projections for this year. In fact, Semiconductor Industry Association recently said that global chip sales declined for the fifth straight month in May.

So, what are the catalysts behind chip makers’ encouraging performance despite the odds? It’s the well-received earnings results from a number of chipmakers. Let’s take a look —

Revenues of $564 million surpassed the Zacks Consensus Estimate of $538 million and were higher than the guided range of $520-$550 million. Nearly 67% of revenues came from semiconductor testing platforms, 13% from Industrial Automation, 13% from the System Test business and the remaining 7% from the Wireless Test business.

The company, in the meantime, has issued a stronger outlook than expected. Management expects third-quarter revenues and earnings per share in the band of $540-$580 million and 64-74 cents, while the Zacks Consensus Estimate for third-quarter revenues and earnings per share are pegged at $547.9 million and 63 cents, respectively.

Nonetheless, such a strong performance is attributable to continued growth in memory test spending, networking, infrastructure and 5G.

And when it comes to Texas Instruments, the company earned $1.36 per share in the second quarter, topping Zacks Consensus Estimate of $1.21 and surpassing management’s guided range of $1.12-$1.32. In fact, Texas Instruments now expects third-quarter earnings per share of $1.31 to $1.53, while market pundits had estimated $1.38 a share.

Revenues of $3.668 billion also outpaced the Zacks Consensus Estimate of $3.605 billion, while the figure was within the company’s guided range of $3.46-$3.74 billion. The company, by the way, expects to generate revenues between $3.65 billion and $3.95 billion in the third quarter.
Texas Instruments’ revenue results in particular are commendable. After all, blacklisted Chinese telecom giant Huawei, a big customer of U.S. chipmakers, accounts for 3% to 4% of Texas Instruments’ overall revenues.

And how can we forget chip bellwether Micron Technology, Inc. MU. The stock has been on fire ever since the flash memory specialist squashed fiscal third-quarter earnings estimates last month. To top it, the firm has raised its 2019, 2020 and 2021 earnings per shares estimates. And now Goldman Sachs has upgraded Micron and raised its price target from $40 to $56. This new target is around 20% higher from current levels.

MagnaChip Semiconductor Corporation MX designs, manufactures, and sells analog and mixed-signal semiconductor platform solutions for communications, Internet of Things, consumer, industrial, and automotive applications. The company currently has a Zacks Rank #1 (Strong Buy).  The Zacks Consensus Estimate for its current-year earnings has increased 29% over the past 60 days. It has an average four-quarter positive earnings surprise of 92.52%. The company is expected to report earnings results for the quarter ending June 2019 on Jul 30.

NXP Semiconductors N.V. NXPI, a semiconductor company, provides high performance mixed signal solutions for radio frequency (RF), analog, power management, interface, security, and digital processing products. The company currently has a Zacks Rank #2 (Buy).  The Zacks Consensus Estimate for its current-year earnings has moved up 3.4% over the past 90 days. It has an average four-quarter positive earnings surprise of 4.19%. The company is expected to report earnings results for the quarter ending June 2019 on Jul 29.

Amtech Systems, Inc. ASYS manufactures and sells capital equipment and related consumables for use in fabricating solar cells, light-emitting diodes (LEDs), and semiconductor devices. The company currently has a Zacks Rank #2.  The Zacks Consensus Estimate for its current-year earnings has increased 7% over the past 90 days. It has an average four-quarter positive earnings surprise of 105.45%. The company is expected to report earnings results for the quarter ending June 2019 on Aug 8. You can see the complete list of today’s Zacks #1 Rank stocks here.

Qorvo, Inc. (QRVO - Free Report) provides radio frequency (RF) solutions and technologies for smartphones and other mobile devices, defense and aerospace. The company currently has a Zacks Rank #3 (Hold).  The Zacks Consensus Estimate for its current-quarter earnings has increased 9.5% over the past 90 days. It has an average four-quarter positive earnings surprise of 14.56%. The company is expected to report earnings results for the quarter ending June 2019 on Aug 1.

GrubHub (GRUB) to Report Q2 Earnings: What's in the Cards?