Barring one-time items, adjusted earnings were 14 cents per share, which beat the Zacks Consensus Estimate of breakeven per share.

U.S. Silica generated revenues of $394.9 million, down around 7.6% year over year. The figure trailed the Zacks Consensus Estimate of $397.6 million.

The company also generated operating cash flow of $71.6 million during the quarter.

U.S. Silica projects capital expenditures to be around $125 million for 2019.

For Oil & Gas proppants, the company expects volumes to increase roughly 10% sequentially in the third quarter. However, it expects softer volumes during the fourth quarter due to stretched production and exploration budgets as well as decline in activity levels.

Per the company, SandBox is making efficiency gains that is driving more savings with customers. It believes that this will offset margin pressure. Minimal non-productive time, bigger boxes and technological improvements are boosting operational efficiency as well as labor cost effectiveness. The company stated that it is actively engaged in exploring new applications for the SandBox technology in other new oilfield segments and industries.

Shares of U.S. Silica have plunged 52.6% in the past year compared with the industry’s 2% decline. 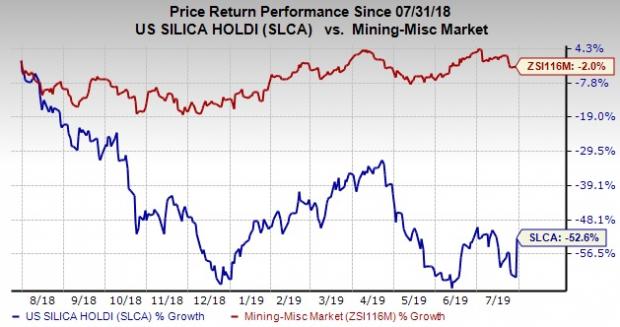 Kinross has projected earnings growth rate of 100% for the current year. The company’s shares have gained 18.6% in a year’s time.

Arconic has an estimated earnings growth rate of 38.2% for the current year. Its shares have moved up 15.9% in the past year.