What to Expect From Montage Resources' (MR) Q2 Earnings?

Montage Resources Corporation (MR - Free Report) is scheduled to release second-quarter 2019 results after the closing bell on Tuesday, Aug 6. The current Zacks Consensus Estimate for the quarter under review is a profit of 9 cents per share on revenues of $145.2 million.

In the preceding three-month period, the company blew away the consensus mark by a whopping 433.3%, buoyed by strong production and continued cost improvements.

As far as earnings surprises are concerned, the Irving, TX-based upstream operator has a good record, having gone past the Zacks Consensus Estimate thrice in the last four reports. This is depicted in the graph below: 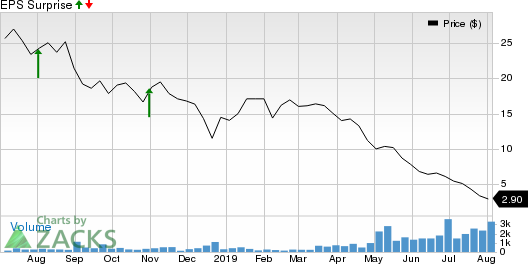 Investors are keeping their fingers crossed and hoping that the Appalachian Basin-focused company can surpass earnings estimate this time around. However, our model indicates that Montage Resources might not beat on earnings in the to-be-reported quarter.

Let’s delve deeper and find out the factors impacting the results.

Two major areas of interest – output growth and natural gas price realizations – are sending mixed signals with regard to Montage Resources’ results in the upcoming quarter.

In the last reported quarter, the company's net production was 36,676 million cubic feet equivalent per day (MMcfe), comprising 74% natural gas. With natural gas prices plunging to multi-year lows and Montage Resources being one of the most gas weighted upstream players, the company's performance remains under pressure.

In Q2 of last year, natural gas prices started at around $2.7 per MMBtu and rose steadily to end June over $2.9 per MMBtu. Coming to 2019, the fuel was trading at $2.7 per MMBtu at the beginning of April but moved sharply lower through the quarter to end at $2.3 per MMBtu.

In other words, Montage Resources’ ‘gassier’ nature of its volume mix exposes it to the vagaries of year-over-year price drop. While the company has hedged a substantial portion of its 2019 production at attractive prices, the sharp pullback in gas prices is expected to impact profitability.

For the second quarter, Montage Resources earlier provided its net production guidance in the range of 500-515 million cubic feet equivalent a day. But based on the strong operating performance, the company revised it upward, hoping to exceed the top end of its previously given forecast. In the corresponding quarter of 2018, Montage Resources’ production was 305.5 million cubic feet equivalent a day.

Our proven model too does not conclusively predict that Montage Resources will beat the Zacks Consensus Estimate this quarter. This is because it doesn’t have the right combination of the two key ingredients — a positive Earnings ESP and Zacks Rank #3 (Hold) or higher — for increasing the odds of an earnings beat.

Earnings ESP: Earnings ESP, which represents the difference between the Most Accurate estimate and the Zacks Consensus Estimate, is 0.0%.

Zacks Rank: Montage Resources currently has a Zacks Rank #2 (Buy), which increases the predictive power of ESP. But we need to have a positive Earnings ESP to be sure of the positive surprise.

Note that we caution against stocks with a Zacks Ranks #4 or 5 (Sell rated) going into an earnings announcement, especially when the company is seeing a negative estimate revision.

While earnings beat looks uncertain for Montage Resources, here are some companies from the energy space you may want to consider on the basis of our model, which shows that they have the right combination of elements to post earnings beat this quarter:

Cheniere Energy, Inc. (LNG - Free Report) has an Earnings ESP of +88.46% and a Zacks Rank #2. The natural gas exporter is anticipated to release earnings on Aug 8. You can see the complete list of today’s Zacks #1 Rank (Strong Buy) stocks here.

Sunoco LP (SUN - Free Report) has an Earnings ESP of +14.64% and is Zacks #2 Ranked. The downstream operator is anticipated to release earnings on Aug 7.

Roan Resources, Inc. has an Earnings ESP of +14.71% and a Zacks Rank #3. The oil and gas exploration and production company is anticipated to release earnings on Aug 7.