The CPU Chip Battle Rages On: AMD vs INTC

The fight for CPU market share is flaring between semiconductor powerhouses Intel (INTC - Free Report) and Advanced Micro Devices (AMD - Free Report) . Intel has been the industry leader in PC and server CPUs for years, but recent execution issues have allowed AMD to come in and swooped up the free market share.

If you are a big PC gamer or computer whiz, I am sure you are more than familiar with the differences between Intel and AMD chips and likely have an opinion on the quality-price mix. For the laymen, a CPU stands for a central processing unit and is effectively the brain of a computer/server.

This technology is continuously advancing with the 54-year-old Moore’s Law still being relevant today. Gordon Moore, one of the co-founders of Intel, stated that the number of transistors on a chip doubles every 2 years while the cost is cut in half, which means that computers will continue to become exponentially faster and more efficient while at the same time cheaper.

Moore’s law still holds today. The number of transistors on a microchip depends on the size of the transistor nodes, which halve every few years. AMD has started shipping 7nm node CPUs while Intel is struggling to unveil its 10nm chips which have experienced excessive delays. Intel originally intended to ship its 10nm chips back in 2016 but had issues on its 14nm node chips. To understand the relative size an atom is .1 to .5 nanometers (nm).

Intel’s recent production issues has allowed AMD to pounce and take a substantial amount of market share. As you can see in the chart below, Intel had been dominating the CPU market for years, but recent events have allowed AMD to take market share with their ability to not only create the highest performing CPU but at a lower price point. Currently, Intel controls 69% of the CPU market while AMD has been able to take a 31% share from the less than 20% it controlled a couple of years ago. 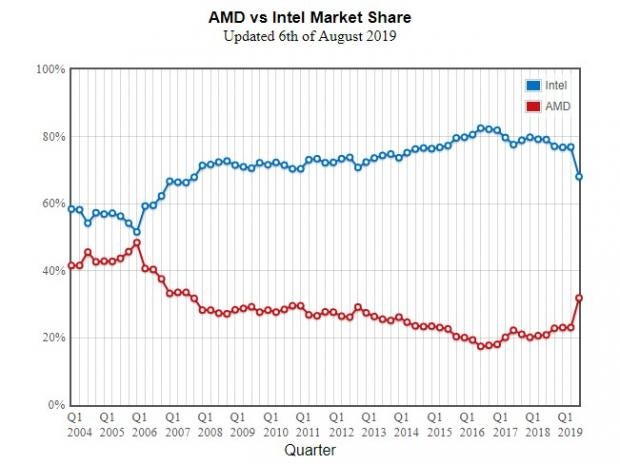 AMD prices its comparable chips at a much lower price point than Intel which has given them the ability to take share but at the expense of margins. AMD’s profit margins are razor-thin ranging from (11.1%) to 5.2% over the past 8 quarters, though they have been improving.

AMD’s upcoming 7nm Rome EPYC CPU for servers is expected to drive massive amounts of demand that could take AMD’s CPU server business to the next level. The cloud space and its expanding server farms are going to require more and more CPUs. I expect demand for server semis has a lot more room to run.

The semiconductor industry is in the midst of a cyclical downturn that is expected to bounce back by Q4. The temporary semi slowdown is partially attributed to the boom this sector saw during the crypto craze with crypto miners creating massive server farms to mine these once lucrative ‘currencies’. This craze died out as crypto prices fell and the ability to mine became limited. The trade war between US and China is doing this sector no favors with the majority of the necessary foundries (transistor node manufacturers) being located in China and Taiwan.

I am confident that cloud computing growth will propel CPU makers like AMD and Intel back into growth.

Ever since Lisa Su took the helm of AMD at the end of 2014, the company has turned around with the share prices up over 600% from the day she took office. In the same time frame, INTC was only able to yield investors 63.8% returns, including dividends.

AMD is making its way back to the top of the CPU market with CEO Lisa Su at the helm producing results. I expect AMD to continue to grow as its CPUs outpace and underprice Intel’s.

Intel, on the other hand, has a much more diversified portfolio of products and services that range from cloud computing to IoT. Intel isn’t going anywhere soon, and I would consider it a much safer bet than AMD with its cushy 2.7% and lower volatility than its cohorts but don’t expect huge returns from this stock.

AMD is a much riskier investment with its near pure-play GPU and CPU business model as well as earnings which toe the line of profitability. Margins should expand as the company realizes economies of scale. AMD has potential to see its share prices skyrocket with its next-generation CPUs leaping ahead of Intel’s.

Uber Vs. Lyft: The Battle For Ridesharing Profits