Non-GAAP EPS of 97 cents beat the consensus mark by 4 cents and improved 21.3% on a year-over-year basis driven by strong operating performance.

Shares of the company have gained 25.3% year to date, underperforming the 33.8% rally of the industry it belongs to. 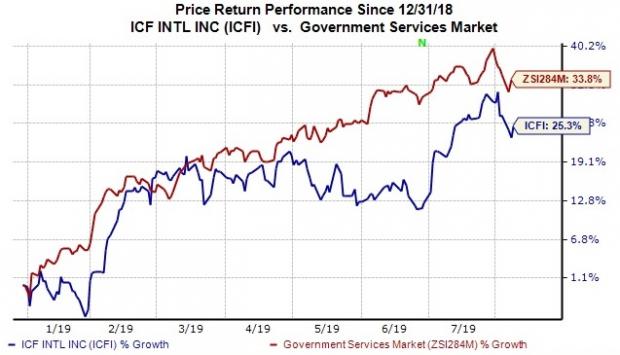 Total backlog and funded backlog amounted to $2.4 billion and $1 billion at the end of the quarter, respectively. The total value of contracts awarded was $403.1 million, representing a trailing 12 month book-to-bill ratio of 1.15.

ICF used $35.3 million of cash in operating activities and capex was $7million. The company purchased 126,000 shares for $9.4 million and paid out dividends of $2.6 million in the quarter.

ICF updated its guidance for the year. Management now expects total revenues between $1.475 billion and $1.5 billion, compared with the previous guidance of $1.45 billion and $1.50 billion. The Zacks ICF Consensus Estimate is pegged at $1.49 billion.

The long-term expected EPS (three to five years) growth rate for Accenture, ExlService and CRA International is 10.3%, 10.6% and 13%, respectively.