Kronos Worldwide, Inc. KRO recorded profit of $29.5 million or 25 cents per share in second-quarter 2019, down from $77.7 million or 67 cents in the year-ago quarter. Earnings per share missed the Zacks Consensus Estimate of 34 cents.

Results in the reported quarter were affected by lower average selling prices as well as higher raw materials and other production costs, partly offset by increased sales volumes.

The company’s TiO2 sales volume rose 15% year over year on higher sales across all key markets. TiO2 production volumes in the second quarter were comparable on a year-over-year basis.

Profit in the TiO2 segment was $51.1 million in the reported quarter, down 58.9% from $124.2 million in the year-ago quarter. The decline reflects lower TiO2 selling prices and higher raw materials (stemming from third-party feedstock ore) as well as other production costs that more than offset higher sales volumes.

Cash flow from operating activities was $26 million for the first half of 2019, down from $169.7 in the year-ago period.

Kronos Worldwide expects production volumes to be modestly higher year over year in 2019. The company envisions sales volumes for 2019 to be higher year over year based on expected production levels and assuming current global economic conditions to remain stable. The company will continue to examine current and expected customer demand levels in the near term as well as align production and inventories accordingly.

Moreover, Kronos Worldwide expects its income from operations to be lower year over year in 2019 as benefits of higher expected sales volumes are expected to be more than offset by reduced expected average selling prices and increased raw material costs (especially feedstock ore).

Shares of Kronos Worldwide have lost 46.8% in the past year compared with 40.2% decline recorded by its industry. 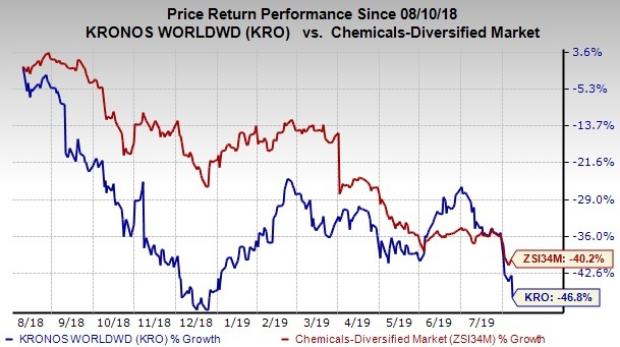 Alamos Gold has projected earnings growth rate of 260% for the current year. The company’s shares have gained 54.9% in a year’s time.

Arconic has an estimated earnings growth rate of 38.2% for the current year. Its shares have moved up 22.4% in the past year.