Innophos Holdings, Inc. logged a profit of around $1.4 million or 7 cents per share in second-quarter 2019, down around 78% from a profit of roughly $6.2 million or 31 cents a year ago. The bottom line in the reported quarter was hurt by a $6.6 million tax charge.

Barring one-time items, the company’s adjusted earnings were 43 cents per share in the quarter, down 22% year over year. However, it topped the Zacks Consensus Estimate of 35 cents.

Revenues were $185 million for the reported quarter, down around 10% year over year, as pricing power was mostly offset by the impact of planned discontinuation of the low-margin nutrition trading business, weaker demand in several markets, reduced sales to the U.S. fertilizer markets due to flooding in the Midwest and the indirect effects of tariffs. Sales also missed the Zacks Consensus Estimate of $201.1 million.

Revenues at the Food, Health and Nutrition (FHN) segment fell 15% year over year to $107 million in the reported quarter, as higher pricing was offset by reduced volumes due to discontinuation of the low-margin nutrition trading business and softer demand.

The Industrial Specialties (IS) division recorded revenues of $68 million in the quarter, up 1% year over year. Increased prices more than offset lower volumes due to indirect unfavorable impacts of tariffs on international sales.

Other sales were down 25% year over year to $11 million on lower co-product and low-grade acid sales volumes.

Innophos has revised its revenue guidance for 2019 to reflect the prevailing market conditions. It now envisions revenues in 2019 to be 6-7% lower than 2018 revenues of $802 million. This compares to the company’s earlier expectation of a 1-2% decline.

The company noted that the revision reflects its expectations that the U.S. fertilizer sales impacted by flooding will not rebound this year as it had expected earlier. Innophos also expects market weakness to continue to affect volumes in FHN and IS units. It also sees pricing and volumes in the IS unit to continue to be impacted indirectly by tariffs. The company also expects lower volumes due to the discontinuation of low-margin nutrition trading business to continue to impact year-over-year comparisons through end-2019. It expects these factors to be partly offset by favorable revenue contributions from price increases and new product wins.

Moreover, Innophos continues to envision adjusted EBITDA to grow 1-3% in 2019 from $125 million in 2018, as benefits of pricing and cost actions are expected to more than offset lower volumes.

Innophos’ shares have gained around 14% year to date, outperforming the roughly 23.3% decline recorded by its industry. 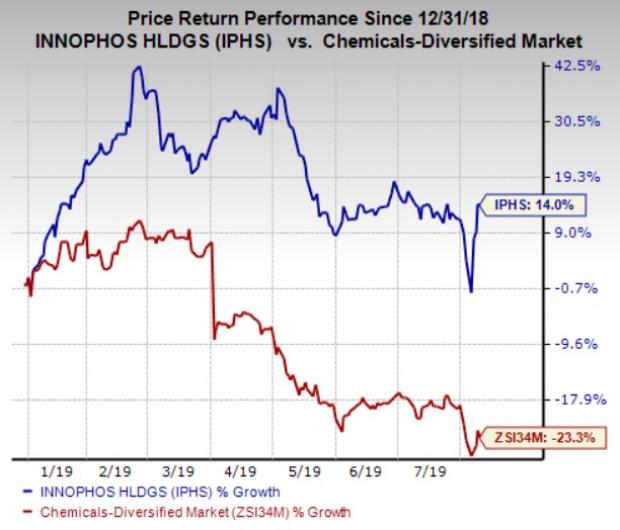 Kinross has projected earnings growth rate of 140% for the current year and carries a Zacks Rank #1 (Strong Buy). The company’s shares have surged around 62% in a year’s time. You can see the complete list of today’s Zacks #1 Rank stocks here.

NewMarket has an expected earnings growth rate of 16.2% for the current year and carries Zacks Rank #1. Its shares have gained around 18% in the past year.

SSR Mining has an estimated earnings growth rate of 134.8% for the current year and carries a Zacks Rank #2 (Buy). Its shares have rallied roughly 70% in the past year.