This designer deals in manufacturing of aluminum road wheels for the automotive industry. The company has wheel manufacturing facilities in the United States and Mexico.

In second-quarter 2019, its revenues missed the Zacks Consensus Estimate and witnessed a year-over-year decline. The decline was due to lower volume, weaker euro and reduced aluminum prices. Further, in the second quarter, the company’s wheel unit shipments declined 11.9% year over year to 4.9 million. The decline in wheel unit resulted from softer industry production levels, reduced share in North America and lower aftermarket volume in Europe.

The company also faced an overall weakness in its European aftermarket business, which was driven by high inventory levels and lower production of vehicles. Consequently, global unit volume fell 12% from the last year. Further, operation in Europe subjects the company to foreign currency fluctuation. A weaker euro to the U.S. dollar exchange rate reduced net sales for Superior Industries in the quarter.

However, the company’s focus on reducing leverage and generating cash flow is driving its business. In the second quarter, it generated significant cash flow and reduced debt by $26 million.

Moreover, the company is undertaking several strategies to strengthen its global competitive position. It also plans to reduce costs through better operational and procurement practices, increased capital reinvestment in product and technology enhancements, and more rigorous factory maintenance. Continuous investments in new manufacturing processes with finer finishes are likely to enhance its position. Superior Industries’ strategy to serve global customer base by introducing innovative technologies is in sync with market trends and customer requirements.

In the past six months, Superior Industries has underperformed the industry it belongs to. During the same time frame, the company’s shares have plunged 44.9% compared with the industry’s fall of 4.2%. 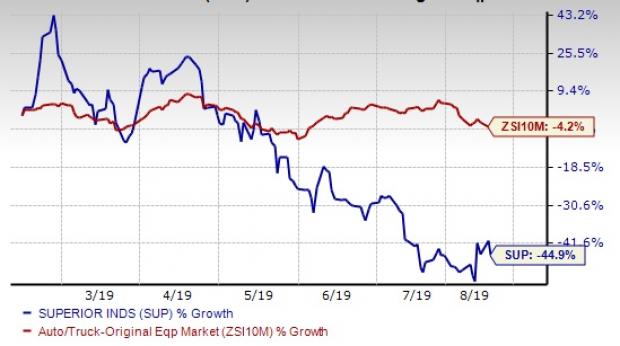 Fox Factory has an expected long-term growth rate of 16.7%. In the past six months, shares of the company have rallied 26%.

CarMax has an expected long-term growth rate of 12.6%. In the past six months, shares of the company have risen 39.7%.

Gentex has an expected long-term growth rate of 5%. In the past six months, shares of the company have returned 38.1%.