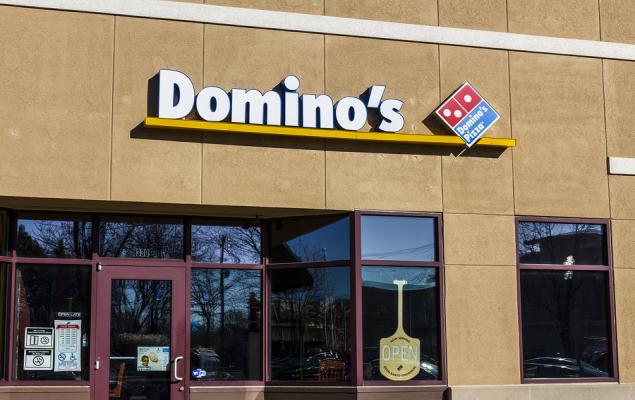 In an effort to improve its delivery, Domino's Pizza, Inc. (DPZ - Free Report) has launched the E-Bike Program. To this end, the company has partnered with Rad Power Bikes, which is North America’s largest E-Bike brand.

These custom E-Bikes can run for 25-40 miles without recharge and hold up to 12 large pizzas. The E-Bikes will have sufficient materials for driver’s safety and top assisted speed of 20 miles per hour.

Domino's will roll out the E-Bike Program across its corporate-owned stores throughout Miami, Salt Lake City, Baltimore and Houston later this year. This world’s largest pizza chain, based on global retail sales, tested e-bikes delivery in a number of corporate-owned stores in New York, Houston and Miami earlier this year. This resulted in overall improvements in its delivery and services, said Tom Curtis, Domino's executive vice president of corporate operations.

The new delivery program will help the company to solve labor issues by enabling Domino’s to hire delivery employees who do not have a car or driver license. Also, stores that were already delivering through traditional bikes found a better solution to the problems related to traffic congestions and parking.

We believe, the expanded e-bike program will help the company to counter stiff competition from third-party delivery companies such as Grub Hub, Uber Eats and Door Dash.

Greg Keller, a Domino’s franchisee in Seattle, stated that “While delivery on a traditional bike solved many of our traffic and parking issues, the hills in Seattle were tough on even our best cyclists”. He also added that “E-bikes were a game-changer for us, and we’ve been delivering with them for three years now.”

This program will help the company to drive sales. In second-quarter 2019, the company’s quarterly revenues improved 4.1% year over year to $811.6 million. Higher supply chain volume, robust same-store sales and increase in-store count both in the United States and international markets drove the company’s revenues.  However, shares of this Zacks Rank #3 (Hold) company have declined 3% compared with the industry’s 30.6% growth.

With Internet, digitalization and electronics influencing every facet of our day-to-day lives, it is obvious that the restaurant industry has embraced this trend. Per The NPD Group, foodservice delivery services have contributed significantly to restaurant sales over the past few years. Over the last four years, digital orders increased by 23%. As a result, digital services are no longer a luxurious feature but the dire need of the hour.

Shares of Denny’s Corporation have surged 54% in the past year.