As part of its plan to become a leading commercial bank, CIT Group already divested more than $14 billion worth of non-core assets.

Additionally, it lowered operating expenses by $150 million over the last three years, and plans to further cut roughly $50 million in annual expenses by 2020. These efforts, together with the acquisition of Mutual of Omaha Bank, will likely boost CIT Group’s financials in the days ahead.

Notably, following the completion of the Mutual of Omaha Bank deal, CIT Group’s common equity tier 1 (CET) ratio is expected to decline from 11.6% as of Jun 30, 2019, to 10%. Nevertheless, the company intends to rebuild its CET1 ratio toward 10.5%, which Moody’s feels is reasonable enough, given the current BCA of baa3. The company has suspended its share buyback until it meets the CET 1 target.

What Can Lead to a Rating Upgrade?

The ratings of CIT Group could be upgraded if the company can sustain an annualized net income to tangible assets ratio of 1%, maintain a CET1 ratio at or above 10.5%, and continuously strengthen the stability and quality of its deposits.

When Can the Ratings be Downgraded?

The company’s ratings can be downgraded if its net finance margin or net income weakens materially or its capital position declines to less than 10%.

Shares of CIT Group have gained 8.2% so far this year, underperforming the industry’s growth of 18.3%. 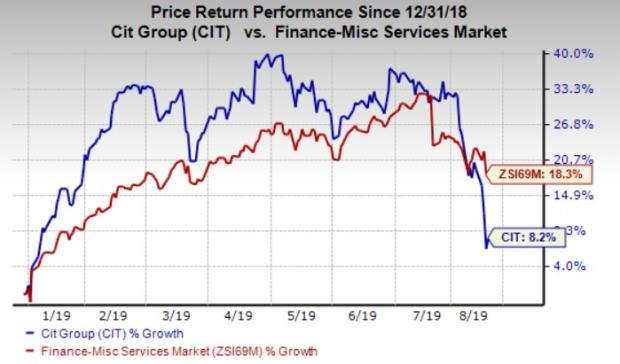 A couple of better-ranked stocks from the finance space are mentioned below.

Over the past 60 days, TriplePoint Venture Growth BDC Corp. TPVG has witnessed an upward earnings estimate revision of 1.2% for the current year. Additionally, the stock has gained around 43.2% so far this year. It also sports a Zacks Rank #1 at present. You can see the complete list of today’s Zacks #1 Rank stocks here.