So, it makes sense to invest in airline stocks that can make the most of an upbeat A4A view.

According to the forecast put forward by the Washington-based trade group, approximately 17.5 million passengers will travel on U.S. airlines during the Labor Day holiday period compared with 16.9 million people who chose to travel by air in the same period last year. The forecast translates into 2.51 million fliers per day during the abovementioned period. Moreover, Friday, Aug 30 is likely to be the busiest day for carriers in the seven-day period, with 2.98 million people expected to take to the skies.

To meet the surge in travel demand, U.S. carriers are increasing the number of available seats by 109,000 per day, despite more than 300 flights being rendered non-operative per day due to the grounding of the Boeing 737 MAX jets.

Additionally, the robust financial health of most domestic carriers has prompted them to invest substantially in improving the flying experience of travelers, in a bid to stay afloat amid stiff competition. Driven by the above reasons, the seven-day period is likely to see 95,000 additional passengers taking to the skies per day on various U.S. carriers.

The optimistic Labor Day holiday period forecast made by A4A does not come as a surprise. It is in tune with the forecast for the busiest summer (Jun 1 to Aug 31) made in May by the same organization.

According to the above estimation, A4A had envisaged 257.4 million passengers to be transported through U.S. airlines over the three-month period. The anticipated surge in air traffic during the Labor Day holiday period can be viewed as an extension of this forecast. A highly successful summer season for U.S. carriers is thus projected to end on an even more jubilant note.

In view of the enthusiasm surrounding airline stocks, as pin-pointed in the write up, we believe that stocks from the space should grace one’s portfolio. However, picking winning stocks can be a difficult task.

This is where our VGM Score comes in handy. Here V stands for Value, G for Growth and M for Momentum and the score is a weighted combination of these three scores. Such a score allows you to eliminate the negative aspects of stocks and select the winners. However, it is important to keep in mind that each Style Score will carry a different weight while arriving at a VGM Score.

We have narrowed down our search to the following stocks, each of which carries a Zacks Rank # 1 (Strong Buy) or 2 (Buy) and VGM Score of A. You can see the complete list of today’s Zacks #1 Rank stocks here.

Apart from the favorable metrics, it is worth noting that the anticipated upsurge in traffic during the Labor Day holiday period should propel growth at the carriers selected below, as passenger revenues account for the bulk of their top line. In view of this, adding these stocks to one’s portfolio further increases the chances of generating higher returns. Additionally, all three stocks have outperformed the industry over the past three months. 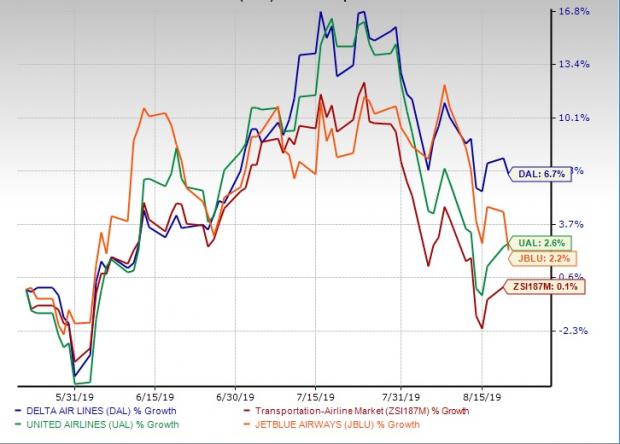 Delta Air Lines DAL, based in Atlanta, GA, sports a Zacks Rank #1. The stock has seen the Zacks Consensus Estimate for current-year earnings being revised 6.3% upward over the past 60 days. The stock’s expected earnings growth rate for the current year is 25.1% compared with its industry’s projected rise of 8.9%.

United Airlines Holdings UAL, based in Chicago, carries a Zacks Rank #2. The stock has seen the Zacks Consensus Estimate for current-year earnings being revised 5.2% upward over the past 60 days. The stock’s expected earnings growth rate for the current year is 27.7%.

JetBlue Airways JBLU is a low-cost carrier based in Long Island City, NY. This Zacks Rank #2 stock has seen the Zacks Consensus Estimate for current-year earnings being revised 6.3% upward over the past 60 days. The stock’s expected earnings growth rate for the current year is 31%.