Ryanair (RYAAY) to Shut Down 4 Bases in Spain Next Year

Ryanair Holdings RYAAY, which is at loggerheads with the unions of Spain — the Unión Sindical Obrera (USO) and the Independent Airline Passenger Cabin Crew Union (STICPLA) — announced that it will close four of its bases in Spain from Jan 8, 2020.

Following the closure of the bases at Tenerife, Lanzarote and Gran Canaria and Girona, total 512 pilots and cabin crew in Spain might lose their jobs, according to the USO. Giving the breakdown, the union added that 164 jobs in Girona; 156 in Tenerife South; 110 in Las Palmas, and 82 in Lanzarote are likely to be under threat due to this latest decision.

Ryanair has cited reasons like overcapacity of pilots and cabin crew due to delays in the delivery of the grounded Boeing 737 MAX jets and Brexit-related adverse developments behind its decision to close the four bases. The company also stated that it was opening the process of collective dismissal. However, the USO did not agree with the company’s explanation.

Infuriated by the decision USO’s Ryanair secretary, Jairo Gonzalo, stated that “The closures and dismissals announced are not justified and Ryanair will have to give explanations to the Spanish labor authorities”. The USO has also accused the low-cost carrier of trying to dismantle its Spanish operations while announcing job vacancies elsewhere in its network.

Notably, this Irish carrier announced the decision while it was in a meeting with the USO regarding the minimum services to be offered during the 10 days in September (1, 2, 6, 8, 13, 15, 20, 22, 27 and 29), when Ryanair’s cabin crew in Spain will be going on strike as mediation between Ryanair and leaders from USO and STICPLA failed.

Currently, Ryanair functions at 13 bases in Spain and operations at each of them are likely to be hurt if the strike materializes. With the situation showing no signs of improvement, we expect investors to remain focussed on updates pertaining to Ryanair’s crisis with the unions in Spain going forward.

Notably, Ryanair has been suffering from labor-related problems for quite some time. This is reflected in the company’s disappointing price performance. In a year’s time, the stock has shed 43% of its value compared with its industry’s 13.8% decline. 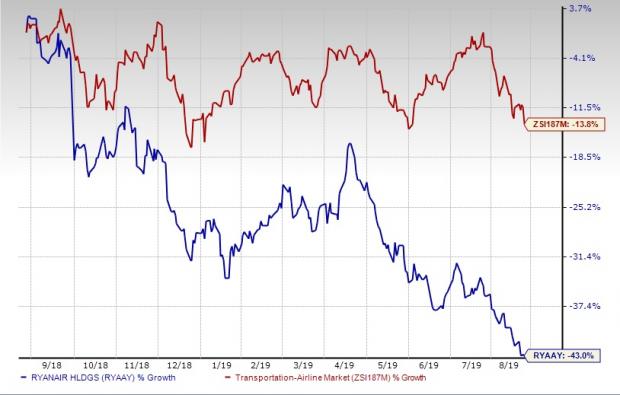 Shares of Delta, Copa Holdings and GOL Linhas have gained 3.9%, 8% and 31.1%, respectively, over the past three months.