Verizon (VZ) Teams Up With Boingo to Promulgate 5G Coverage

Per media reports, Verizon Communications Inc. VZ has announced a new partnership with Boingo Wireless, Inc. WIFI — a Los Angeles, CA-based wireless connectivity solutions provider. The telecom bellwether aims to continue its lead in promulgating next-gen 5G mobile networks nationwide. It is going all out to maintain its market share as the largest national wireless carrier while the breakthrough technology reshapes the industry.

As the race is heating up, Verizon is seeking competitive edge in a saturated and price-sensitive market, which involves prominent players like AT&T Inc. (T - Free Report) and T-Mobile US, Inc. TMUS. The company has upped the ante against its rivals by launching 5G Ultra Wideband mobility service in multiple cities.

The network hinges on three fundamental drivers to deliver the full potential of 5G technology. These include massive spectrum holdings, particularly in the millimeter wave bands for faster data transfer, end-to-end deep fiber resources and the ability to deploy large number of small cells.

With one of the most efficient wireless networks in the United States, Verizon continues to deploy the state-of-the-art technologies to deliver increased capacity, lower latency and faster speeds, driven by customer-focused planning, disciplined engineering and constant strategic investments.

Interestingly, Boingo builds Wi-Fi networks at large-scale venues such as airports, stadiums and office buildings, using antenna systems and small cells. Verizon stated that it is working with the indoor network provider to get its 5G off the streets and behind the doors and walls.

Furthermore, the company announced that 5G was going live in Phoenix, its 10th of more than 30 planned 5G mobility cities launches in 2019. It said that Samsung’s Galaxy 10+ 5G was available for purchase. The company expects to capitalize on the impending 5G boom and outsmart competitive pressure.

Backed by healthy traction in the wireless business, shares of Verizon have rallied 16.7% against the industry’s decline of 0.6% in the past two years. The company surpassed earnings estimates in each of the trailing four quarters, the average surprise being 2.6%. 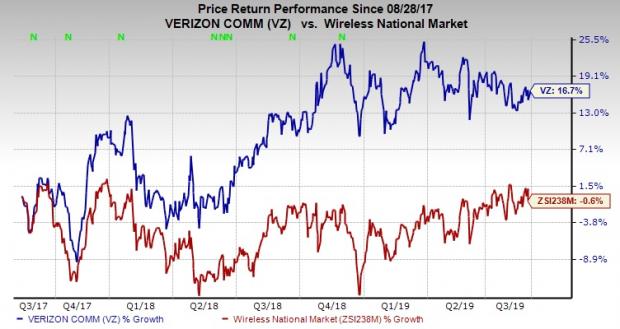